Guam – Medical professionals from the Armed Forces of the Philippines, municipal health workers, and the Guam Army National Guard treated 7,200 residents during a recent two-day medical mission at two different towns in Pampanga province, about a two hour drive north of the Philippine capital of Manila.

[CPT Roseann Apuron, (left) a nurse with the GUNG MEDDET, assists BG Ismael Tumaru, a physician with the AFP RESCOM, with a minor surgical procedure during the Medical/Dental Subject Matter Expert Exchange, under the State Partnership Program between GUNG and the AFP. Behind them working on another patient, are (from left) CPT Sheila Compton-Rivo, GUNG MEDDET planner, Lt. Cmdr. Edgar San Luis, a nurse practitioner at the U.S. Naval Hospital Guam, and COL Michael Cruz, a physician with GUNG MEDDET. (GUNG Photo by CPT Ken Ola)]

The types of treatment provided to the residents at both towns included dental and medical procedures, minor surgeries, circumcisions and vision check-ups. Circumcisions are in demand for adolescent boys during the summer months in the Philippines when school is not in session. 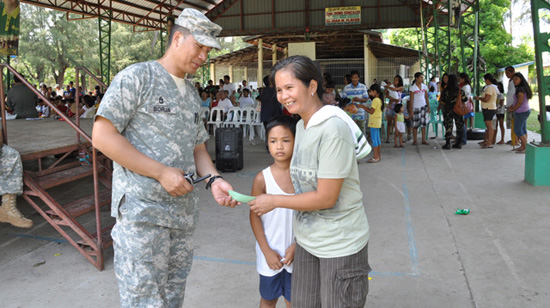 [SFC Aldrin Borja, a medic with GUNG MEDDET, directs a resident away from the waiting crowd to her assigned treatment room, during the Medical/Dental Civic Action Project Subject Matter Expert Exchange in Santa Ana Central Elementary School in the province of Pampanga, Philippines. Borja is originally from the same province and spent his childhood years in the nearby town of Arayat. (GUNG Photo by CPT Ken Ola)]

There were more residents treated during this MEDCAP than previous missions. The next largest number of people treated was during the MEDCAP in the towns of Balete and Malvar in province of Batangas, with a total of close 5,000. MAJ Jay Castro, SPP coordinator for GUNG, attributes the larger number of residents seen to an increase in participation of the local government units (LGU).

“We are now coordinating at the municipality level, talking with the mayors and the municipal health leadership,” Castro said.

The final number of people seen at Arayat totaled 4,142, according to CPT Sheila Compton-Rivo, medical planner for GUARNG.  The participation of the LGUs helped make the registration and patient traffic control at both sites run quicker and smoother, she added.

Dr. Paul Austria, municipal health officer for the municipality of Arayat, said his town comprises 30 barangays. They anticipated seeing at least 3,000 residents during the one day mission in their town, conducted on May 20.

The majority of ailments commonly found in the community include respiratory tract infections, hypertension, and diabetes, according to Austria. Four of his municipal doctors were assigned to work with the AFP and GUARNG medical team, he added.

CDR Harry Hamilton, the senior officer with the Navy medical staff from the U.S. Naval Hospital Guam, said the mission was valuable both professionally and personally for his team members.

“Number one, the mission developed jointness between the Navy, Air Force and the Army team. One team, one fight so to speak. I think primarily it benefitted the Filipino people. We were able to bring some talent and help people who can’t afford to have relevantly simple procedures done without costing them a fortune,” he said.

Hamilton said that for the Navy team, the mission provided opportunities for some of his younger corpsman to actually gain some hands on experience, and build some confidence. These are skills, he said, that will help provide the confidence to do things that are a little outside of their comfort zone, when these corpsmen are deployed at some future date,

“I think it was a great mission overall. I know the nurses certainly enjoyed it. They felt like they were contributing something positive to the community, especially the nurse practitioners,” Hamilton added. “That’s they’re cup of tea, that’s what they’ve trained for. It’s really value added for them to go out and do this mission.”

Missions like these, conducted, through the SPP also, help strengthen relations between the Republic of the Philippines and the U.S.  The SPP is a Department of Defense sponsored program administered by the National Guard Bureau (NGB), partnering Guard units from different states with selected countries for nation building, among other projects. The Philippines is the Guam Guard’s partner state.