On Feb. 16, about 50 gallons of fuel was removed and an additional 540 gallons was removed Feb. 18. The diesel fuel was pumped into containers on shore and then staged in an environmentally safe containment zone for disposal. Additionally, four marine batteries and several fishing nets were safely removed.

Divers assessed the vessel and determined the portside and bow fuel tanks have ruptured, and approximately 60 percent of the estimated 7,500 total capacity was lost in the wreck and aftermath.  Efforts are currently underway to safely remove the remaining fuel. The chemical nature of diesel fuel is that it dissipates at a high rate in high surf, and high temperature environments. Based on NOAA modeling of this location, minimal diesel would remain after 24 hours. Environmental teams have found no visual evidence of fuel residue or sheen on the beach and surrounding waters.

“Removing an additional 540 gallons of the diesel fuel and most of the other miscellaneous hazardous materials brought us one step closer to completing our primary objective of protecting the environment and allows us to shift from an emergency response to a salvage operation,” said Dennis Siler, Naval Base Guam Operations Manager. “Once we finish removing the remaining fuel, the next big challenge the unified command and particularly the salvage teams will face is how to safely remove the vessel.”

Contract salvage teams are assessing the vessel and formulating plans for the removal of onboard refrigerants, and for breaking down and removing the vessel from its current location.

The unified command consists of representatives from Naval Base Guam, U.S. Coast Guard Sector Guam, Guam Environmental Protection Agency, and the responsible party.  Other agencies that have been involved in all aspects of planning from the standup include Joint Region Marianas Operations, Naval Facilities Command Environmental personnel, NOAA, Guam Fish and Wildlife Service, Cabras Marine and Osroco. 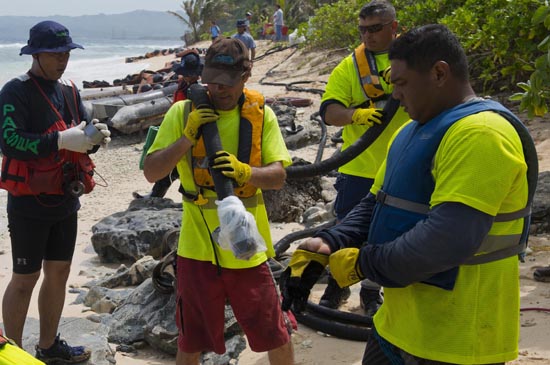