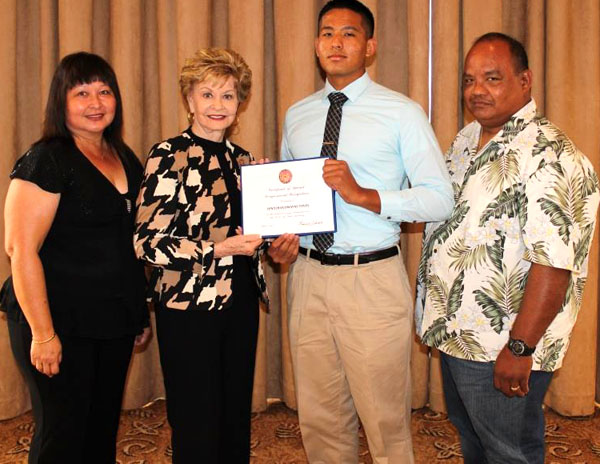 Jonathan is the son of Jim and Doris Toves of Barrigada and will graduate from Father Duenas Memorial School in May 2014. Jonathan was nominated by Congresswoman Bordallo and competed with nominees nationwide for admission into the Air Force Academy.

Jonathan is an honor roll student and the parliamentarian of the FDMS National Honor Society. He is also a Cadet Lieutenant of the Phoenix Company Naval Junior Reserve Officer Training Corps and a member of several academic and extra-curricular organizations.  Scott is also a member of the FDMS tennis team and paddling team, a member of the IIAG All Island Tennis Team, and the FDMS Spanish Club treasurer.

“Jonathan Toves has an impressive academic and extracurricular record, and I congratulate him on his appointment to the U.S. Air Force Academy,” said Congresswoman Bordallo. “I am confident that he will excel at the Air Force Academy and look forward to his service to our nation as an officer in the Air Force.”

[ Congresswoman Madeleine Z. Bordallo presents a Certificate of Special Congressional Recognition to Jonathan Toves nominating him to the U.S. Air Force Academy. He was joined by his parents, Jim and Doris Toves]