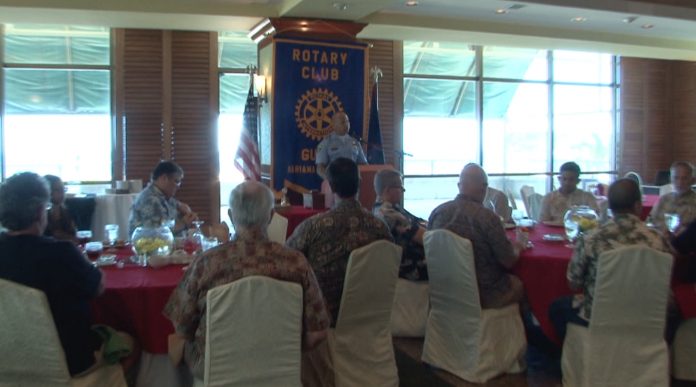 Guam Rotary Club meets weekly to discuss important matters concerning the community in many aspects.  Today the club hosted Chief of Police, Joseph Cruz as a guest speaker who covered topics involving his long term and short-term plans as well as his responses to questions asked by members.

Some of the Chief’s responses included his applaud and encouragement of GPD working cohesively with federal agencies to cut down on federal crimes and  he shared his response to the necessity of kobans on Guam.  Cruz shared that he finds them to be helpful to establish police presence beyond the precinct offices and to help increase productivity.  He shared his appreciation for Mayor Rudy Matanane’s contribution of space for a satellite office.

When asked about the Community Assistance in Policing efforts, Cruz clarified that CAPE is designed to help with neighborhood programs and the law allows members to enforce non-moving violations specific to littering and handicap violations.

He also addressed his support of maintaining transparency within the force, stating that he would like the subordinated commanders to handle complaints and look into the investigations, as it will help hold officers accountable and empower the subordinate commanders.

Q: “For you, a comparable city of 175,000 people, could you give us an idea of how many police officers, realistically you are short, why they’re necessary to continue in overtime, and how many vehicles you actually need in order to be comparable with maintaining a crime free area such as…. any comparable city of course?”

Cruz:  “A survey was done by the Department of Interior back in 2012  and they took the information  that was attained from the last census conducted on the island of Guam and they took that information along with what was  and they took what is in Guam law chapter 77 of title 10 and based on the population we have and the amount of citizens that exist in our community, they have determined that the amount of patrol officers we need out on the streets is about 484–And that’s just our operations bureau, that go out and patrol the streets. That’s not including our criminal investigators and all the other divisions within the department. So we’re looking at 484 officers to patrol the streets of which our total uniformed force is at 327. So that’s the disparity that we are dealing with now and that’s the reason why we accrued so much overtime.  So in my tenure as the Chief, I have empowered my subordinate commanders to be very critical at the amount of overtime thats being worked and that unless the officer that is coming in to work overtime directly relates or is  tied to the mission accomplishment of that particular percent or that part section then that overtime is not to be worked.  But you must understand if 484, based on that study, is the number that we should be at  based on  our population and what Guam law states, then we are very undermanned. Which is why I rely heavily on that bill to be passed into law and funding be attached to that so that we can increase from 327 to hopefully 527 over the next 5 fiscal years. That should hopefully alleviate some of the pressures that we are feeling out on patrol and within some of the sections that we have within the department.”

Cruz also added that if those are the numbers that Guam should have in terms of officers then GPD should have an estimated 100 vehicles to match the necessity to provide enough for the patrol.  He mentioned that vehicles should be used for 8 hours and rest 16, yet GPD vehicles are working around the clock which can affect efficiency when it comes to long term use and efficient patrol.  The type of vehicle specifications that are needed tack on thousands of dollars and GPD has gotten help from the stakeholders in the community and there are grants out there that they are working towards but they are still under budget.

Cruz stated that protection is important to the Guam community and that is why he has formed his long term and short term plans to positively impact the police department’s work in the community.  He says his long term and short term plans are not guaranteed to be completed in the order he lists them but he will work on each of them at his best in order to improve Guam’s Police force for the betterment of Guam.