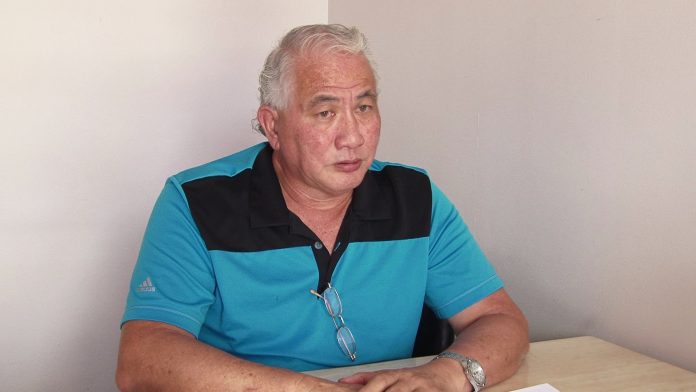 GDOE Superintendent Jon Fernandez filed extortion charges against the principal, a substitute teacher and a student who says Fernandez sent her a sexually suggestive text message.

Guam – JP Torres Alternative School Principal Eleuterio Mesa is speaking out against GDOE Superintendent Jon Fernandez. Fernandez is facing sexual harassment allegations from a JP Torres student but he says Mesa, the student and a former substitute teacher are just blackmailing him.

“The intent is to get that money for the school and nothing else,” says Mesa.

PNC: “Does that rise to the level of extortion?”

“I don’t think that’s extortion simply because it was discussed earlier that that is really what the student wanted and mind you the chairwoman kept pounding on the kid ‘So what is it that you want?’” says Mesa.

Mesa says several meetings and discussions were held between the student, her parents, himself, former substitute teacher Marcia Palomo, Fernandez and the board. The mediation meetings were held in an attempt to resolve the issues.

The case stems from a text message Fernandez allegedly sent the 18-year-old student back in January in which he supposedly told her he would give her a free cell phone if she is quote a good girl. The student also says Fernandez gave her a “butt rub” while hugging her during school activities back in March.

Mesa, Palomo and the student first took their complaint to the Guam Education Board and then to the Guam Police Department.

But Fernandez filed his own criminal complaint for attempted extortion because Mesa allegedly demanded a settlement in his civil service commission case based on his terms, the student asked for $10,000 for private school tuition and Palomo allegedly asked for a permanent job at GDOE.

PNC: “There’s still no evidence now, though, as far as the text message is concerned.”

“Well I was informed by a top police official that there’s no such thing as a deleted message. But you have to go through court to get it. So if the superintendent’s got nothing to hide and wants to tell the truth,” explains Mesa.

As far as the student’s request for $10,000, Mesa says the amount was increased for negotiation purposes.

“It concerns me greatly the interpretation of blackmailing, extortion and threats. “That amount of money of $10,000 was put out to pay for the school and nothing else. Just like any kind of negotiation, you know, you don’t start at $6,000 and get $6,000 unless you’re really firm about it,” he says.

Despite allegations that Palomo demanded a permanent job with GDOE, Mesa says he submitted evidence to Guam Police to show that such a demand was never made. He says he emailed GEB Chairwoman Lourdes San Nicolas on June 19 to inform her that a permanent position for Palomo was off the table because it is illegal for GEB or the superintendent to offer anyone a job.

Mesa says there is an outstanding judgment he’s trying to settle with GDOE but that settlement has nothing to do with the student’s case and he says he’s been trying to resolve his own case since 2014.