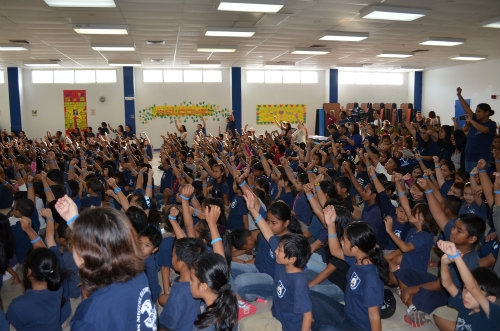 A total of 26 teachers petitioned to remove the principal from the school.

JQSMES PTO President Shauntay Aflleje says, “From day one of her at JQ San Miguel, which was before school even started. She took materials from classrooms. She went through classrooms, took them away and give them back to central office. The teachers were like what happened, we may not be a DI school but we can use those materials.”
On K57’s Breakfast Show with Patti Arroyo this morning, Aflleje says they first complained about the principal in October, but they felt that nothing was being done, so they decided to speak out again at the recent Guam Education Board meeting. Aflleje says 26 of the 31 teachers at the school signed a petition to have Castro removed as principal.
“We’re going to do what we have to do. I’m going that far. We’re not going to wait for him. We’re going to do something about it because he’s not,” she expresses.
Aflleje explains that there is a hostile work environment at the school. Other problems brought up by stakeholders include the lack of a Special Education and English as Second Language teacher, sudden changes  in curriculum without teacher input, and overloaded class sizes. She continues on, “Nothing is happening. We have filed grievances but now that our GFT is gone from our school, we have nobody speaking out for us which is why our teachers have decided to risk themselves. They don’t walk to leave San Miguel but they don’t want to continue working in that environment either.”
However, in a letter addressed to the school’s community, GDOE Superintendent Jon Fernandez says he is concerned about the claim that GDOE management has been disinterested or inactive in working to address the concerns raised. From the initial complaint in October, Fernandez argues, much has been done and is still in progress.
Fernandez says he has formed a small task force with three experienced administrators to conduct interviews with stakeholders and then make recommendations. Since then, Fernandez says that task force has been conducting weekly site visits, consultative meetings, classroom observations, and meetings with Principal Castro. Lastly, Fernandez advises the dissatisfied stakeholders to follow formal grievance procedures outlined in GDOE Personnel Rules and Regulations as well as in Board Policy 830 regarding parental grievances specifically.