Jury selection is ongoing in the Mark Torre Jr. case, but there is a possibility that the case may be impacted significantly as presiding judge Michael Bordallo has announced his impending resignation during jury selection this morning.

Bordallo’s “impending resignation” — as he put it — will result in the assignment of the case to a new Superior Court Judge and according to Torre Jr’s attorney Jay Arriola, that will significantly impact the current jury selection process and the coming trial.

There are also several motions before the court which will also have to wait for a new judge to be assigned to the case. But the concern the defense has with the news is whether or not Torre’s rights to a fair trial will be impacted.

Judge Bordallo’s resignation is not yet official, but according to Arriola, Bordallo said he hopes and trusts that whoever the new judge is will step up to the plate beginning tomorrow morning.

According to Arriola, Bordallo is also hopeful that the newly assigned judge will call for a hearing tomorrow and a date for continued jury selection will be made.

“We are hoping that the court has already made its efforts to secure a conflict-free judge. There’s only several of them available so it shouldn’t take too long to figure out who has conflicts and who has scheduling issues or who can or can’t preside over the case,” Arriola said.

Judge Bordallo’s reasons for stepping down from the Superior Court are being kept under wraps. However, sources have indicated that he may be taking on the position of Magistrate Judge for the District Court of Guam.

District Court Magistrate Judge Joaquin Manibusan is set to retire at the end of the month.

His replacement has not yet been officially named.

However Judge Iriarte asked to be disqualified because she is related to Joseph McDonald, the former chief prosecutor, who was involved in prosecuting the Torre case 4 years ago. 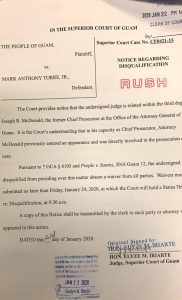