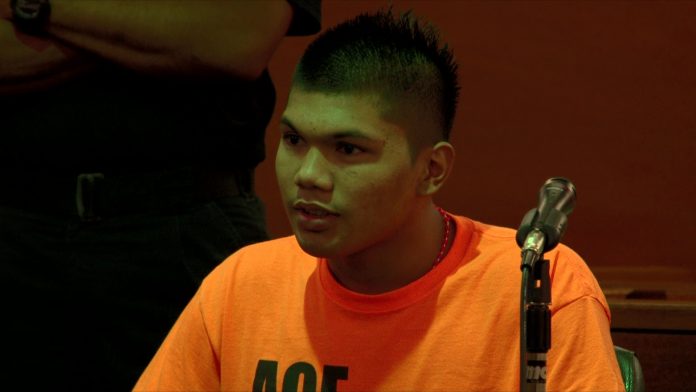 Jathan Tedtaotao was sentenced to 5 years in prison which is less than half the sentence the AG’s Office asked for.

Guam – Jathan Tedtaotao will be serving even less time than what would have remained after removing the sentence from his fake bank robbery confession. Judge James Canto, in handing down the new sentence, told Tedtaotao he’s not ready to give up on him.

“Here’s the thing, Jathan,” Judge Canto began, “I don’t wanna give up on you. I don’t wanna throw you in jail and throw away the key.”

Judge James Canto seemed more sympathetic toward Jathan Tedtaotao this time around, granting him some leniency in his request for a lesser sentence.

Remember, Tedtaotao was originally sentenced to serve 21 years–10 for the Bank of Guam robbery, 10 for a separate burglary and 1 year for unauthorized use of a motor vehicle. But since the Bank of Guam guilty plea was overturned, the 10 years he got for that crime were also removed from his sentence, leaving Tedtaotao with 11 years left to serve.

Last week Tedtaotao admitted that he gave a fake confession in the Bank robbery after Irvin Muna White and his father Jackery White came forward and said they were the real bank robbers.

But Tedtaotao’s attorney, Gerald Gray argued to have his client’s sentence reduced to just 5 years, noting that the bank robbery negatively impacted the sentence Tedtaotao received for the other crimes.

“We think a lesser sentence would depreciate the seriousness of his offense and anything less than the maximum would just be considered the cost of doing business … especially in this case because his misconduct has accumulated in a very short amount of time in a very public way and the damage that he’s done to the people of Guam, to the community of Guam is still ongoing,” said Assistant Attorney General Brian Gallagher, disagreeing with Gray.

“Your honor, I just ask for leniency and if you can maybe order me to RSAT due to my addiction … I need help,” Tedtaotao pleaded. The RSAT is the Judiciary’s Residential Substance Abuse Treatment Program.

Judge Canto agreed with Gray and sentenced Tedtaotao to just five years, even encouraging Tedtaotao to try and get out sooner with good behavior.

“What doesn’t matter is the number, the number of days or months or years that I’m gonna give you, what matters is what you do with it. It’s your life because your life is not over,” Judge Canto told Tedtaotao. “Do your time. You pay your debt to society and you get out and move on and you’ll be successful in your life.”