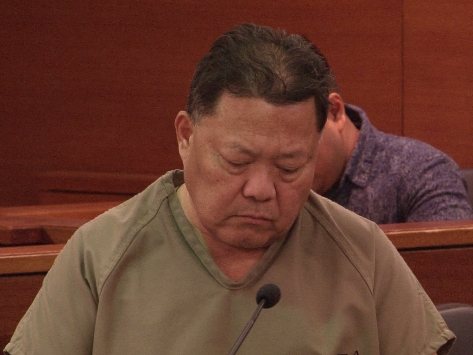 Guam – One of the former police officers involved in the Blue House prostitution case was back in court to try to convince the judge that he deserved a reduced sentence.

David Manila was sentenced to 30 years after openly admitting to paying for sex. The court heard arguments last Friday on the motion to correct and reduce Manila’s sentence to time served. Manila’s attorney, Terence Timblin, argues that Manila had a clean record before this case and was accidentally involved.

“If you look at the overall evidence that was presented at trial, Mr. Manila’s involvement was incidental, almost to the point of being accidental. That is, he never heard of the Blue House before until he was based in the Tumon precinct… I think that the imposition of 15 years would be unduly harsh,” Timblin said. “Again, Mr. Manila led a blameless until all this came up in 2008. He was a member of the Guam Police Department prior to 2008, did a perfectly good job, and often commended for it.”

Asst. Atty. Gen. Jonathan Quan did not agree. He argued that Manila and the other officers committed multiple crimes that were planned over a long period of time, and not in the spur of the moment. “These were seasoned officers, mature men, who were on the job for a long time, who made these decisions over a long period of time encompassing multiple victims over years,” Quan argued. “If we were to take the maximums of everything, of all the charges but consolidate the counts, which is beneficial to the defendant, we’re looking at life in prison plus 37 years. Aggregating all charges consecutively but all counts concurrently. That’s what he’s looking at as a maximum. And to now request something below 15 years…is an injustice to the victims.”

Judge Anita Sukola denied the motion for correction and reduction of sentence. Manila’s sentencing hearing will be on April 13 at 3 p.m.