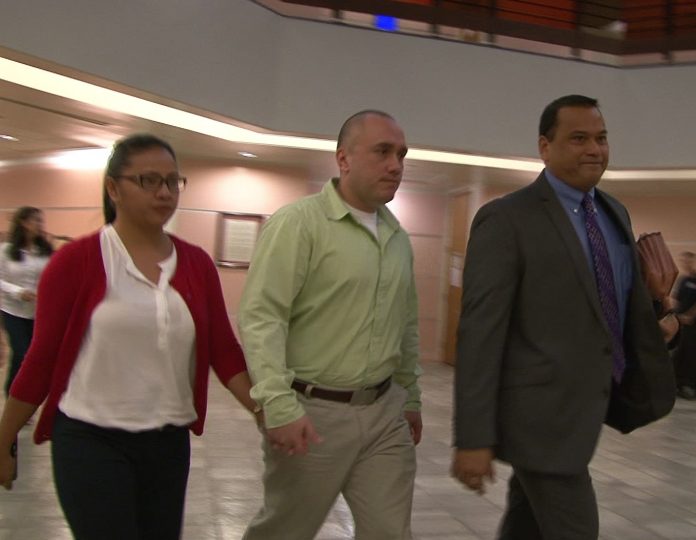 Judge Michael Bordallo also denied the defense’s request for a media ban in the case. Meanwhile, the Piolo family says they just want the truth.

The judge, did, however, approve a request for an investigator.

The requests include a motion for modification of bail conditions that would allow Torre’s father, Lt. Mark Torre Sr., also a police officer and considered a key witness, to return to the family’s Yigo residence, thus allowing for contact between the father and son.

That motion was denied. But it was denied on the basis that Lt. Torre Sr. has, by invoking his Miranda rights, refused to fully cooperate with investigators on possible evidence he may still be hanging on to.

On the motion for a government funded forensic expert, Judge Bordallo said he failed to see the necessity. But Arriola argued that they “need an expert to review and counter Dr. Aurelio Espinola’s findings.” Medical Examiner Dr. Aurelio Espinola has ruled the slain officer’s death to be a homicide.

“Simply saying that you’ve got a lot of discovery–just for example saying that, ‘Well they had Dr. Espinola.’ Well Dr. Espinola is an independent medical examiner. He doesn’t work for law enforcement or the AG. He does medical examinations for the territory,” says Tydingco. “It doesn’t mean they can’t have an expert. They can go and hire an expert if you want to, if you have your own funds or resources. You can hire any expert you want. But if you want the government to pay for it then you need to establish necessity.”

Judge Bordallo, however, granted Arriola’s request for a court-appointed investigator. The court will pay for an investigator but the cost must not exceed $1,500. However, Chief Prosecutor Phil Tydingco pointed out that Torre must first establish that he’s indigent before a request that would cost the government can get approved. This means that Torre needs to prove that he’s unable to afford it. Arriola said as much, noting that his client is indigent–he has no job and no source of income. The Guam Police Department did not terminate Torre’s employment from the police force. Torre voluntarily resigned about a month after the alleged murder happened.

On Arriola’s motion to ban media coverage, Arriola noted that the “excessive media coverage” materially interferes with Torre’s rights to a fair and impartial trial. But Judge Bordallo denied that request saying “the trend is to allow more media coverage at the Judiciary.”

Finally, we spoke with Sgt. Piolo’s brother, Edison Piolo. His pain is still evident from the loss of his brother. This is what he told us prior to today’s proceedings.

“The public needs to know because this is–one person’s gone while the other guy is sitting at home eating popcorn, on house arrest, the bail’s been dropped; and we are suffering,” he told us. “We want what’s right. We want the truth. He knows the truth. Guilty or not, we just want the truth, what happened. Because right now we’re still mourning. We lost my brother.”

The next court hearing is scheduled for January 28.