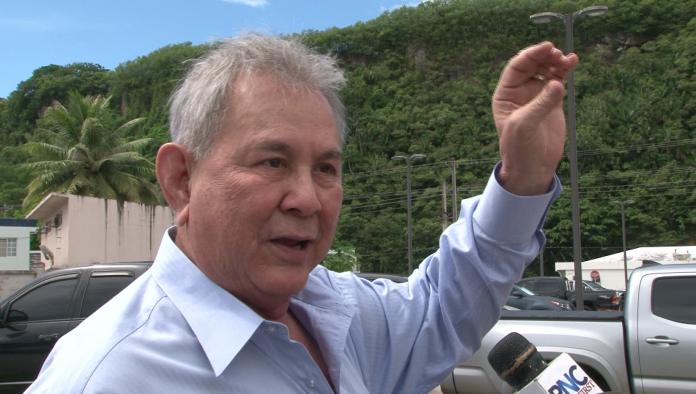 So as long as there is uncertainty on the validity of the statute, it’s supposed to make everyone scared and come to a quick and cheaper settlement. That’s the scam. — Attorney David Lujan

Guam – US Magistrate Judge Joaquin Manibusan has granted Archbishop Anthony Apuron’s objection to a stay that would allow the church to continue with settlement negotiations in the sex abuse lawsuits related to Apuron.

Meanwhile, Attorney David Lujan, who represents a majority of the alleged victims, is calling the objection a scam.

Both parties argued a motion to stay the proceedings. While the motion was denied in regards to Apuron, the motion stands as granted for all other defendants. Apuron’s leagal counsel, Attorney Jaqcue Terlaje is requesting that the District Court address the merits of Apuron’s motion to dismiss, arguing that the court does not have authority over his case and therefore cannot continue to hear his case.

“We are basically challenging the plaintiffs’ rights to pursue the cause of action of a civil TORT against Archbishop Anthony. Basically, the statute of limitations law that was passed by the legislature is unconstitutional,” she pointed out. “So the plaintiff and the Archdiocese of Agana have asked the court to put that in abeyance while they try to mediate their cases and we said no way. You can’t trample on the rights on a one-party litigant and advance the competing interest of the other interests and so the court agreed with me.”

Lujan welcomes the prospect of trial in the Apuron case. However, says its all a “scam” and that Apuron has a chance of coming back to Guam.

“So does he want to come back to an archdiocese that has absolutely nothing; that these small Protestant churches have more wealth than that? If his motion is denied–because you know what, we are going to go to trial, believe me–but they are banking that the settlements are going to be finished and they are going to be done before that decision is made that’s what they are banking on,” argued Lujan. “This is the scam. He is not going to go into mediation. This is the scam. So as long as there is uncertainty on the validity of the statute, it’s supposed to make everyone scared and come to a quick and cheaper settlement. That’s the scam. And my job is to make sure not to allow that scam to work.”

“We are saying we are not interfering with their mediation. We don’t want to interfere with this process. We think it’s good for them to move forward with the mediation process but with respect to ArchbishopAapuron, we are asking they address the legal merits of the cause of action,” Terlaje said.

Lujan says it may be a while before that motion is resolved, adding that while Judge Manibusan may make a recommendation, it may not be until 2018 that Chief District Court Judge Frances Tydingco-Gatewood rules on it.

Meanwhile, Archbishop Apuron is still waiting for word on his canonical trial. Lujan states that if Apuron is removed it is like a conviction but he is unsure if the District Court will allow a decision made in the canonical trial to commune as evidence.

“The fact–let’s say that he is defrocked, that would weigh, every potential juror is going to know that he has been judged guilty and that’s why he has been removed. So of course that will be on the mind of every juror. So going into jury selection everyone is going to be anti-Apuron,” Lujan pointed out.

A hearing for the motion to dismiss Apuron’s case is scheduled for August 29 at 9:30 am.