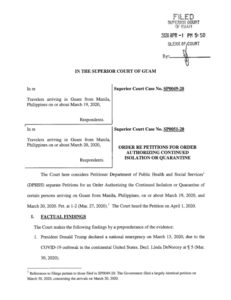 Superior Court Judge Elyze Iriarte has granted the Government of Guam’s request to continue the quarantine of at least 3 COVID-19 positive travelers, and the people they’ve come in contact with.

During Wednesday’s internet news conference, Gov. Lou Leon Guerrero said that 3 of the quarantined Manila passengers had tested positive for COVID-19. She could not say how many other people they had come in contact with.

In her order, Judge Iriarte granted GovGuam’s request “to continue the isolation of any quarantined individual who has tested positive for COVID-19; and that such isolation shall continue until DPHSS determines that the individual is no longer in danger of spreading COVID-19 to others, and for no longer than until April 28 … or further order of the court.”

During the Wednesday news conference, Territorial Epidemiologist Dr. Ann Pobutsky said there were 221 passengers in quarantine at various sites on island. Officials have declined to confirm those sites. PNC News has learned that at least 4 hotels have been used as quarantine sites. They are the Days Inn, the Wyndham Garden Hotel, the Santa Fe Hotel and the Pacific Star Hotel.

On Tuesday, at least some quarantined passengers were given a letter from Public Health 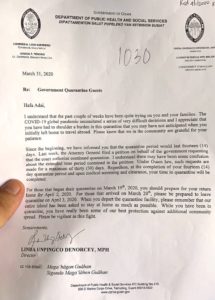 Director Linda DeNorcey advising them that the Guam Attorney General had filed a petition “requesting that the court authorize continued quarantine.”

The letter noted that Guam law allows for quarantine for a maximum of 30 days.

The letter concludes with: “While you have been in quarantine, you have really been some of our best protection against additional community spread. Please be vigilant in this fight.”