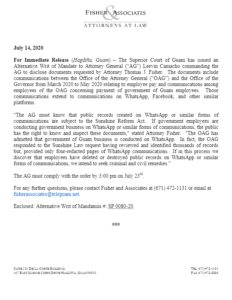 Superior Court Judge Elyze Iriarte has issued an order to Guam Attorney General Leevin Camacho requiring that the AG turn over the documents sought by attorney Tom Fisher in his double pay appeal.

In her order Judge Iriarte “commanded” the Attorney General to comply with Fisher’s Freedom of Information Act request “and disclose requested documents.”

On May 19th Fisher filed suit on behalf of a Guam police officer seeking to force GovGuam to provide the officer and others with double pay for their efforts on the frontlines fighting the spread of the coronavirus.

Fisher then appealed to the Guam Supreme court and in support of his appeal, he filed a Freedom on Information Act request with the Attorney General seeking internal emails and documents discussing the double pay issue within the AG’s office and within the administration.

The AG declined to provide those emails and documents. Fisher subsequently filed a petition to force their release.

In her order today Judge Iriarte requires the AG to appear before her court at 3 p.m. next week Thursday, July 23, “to demonstrate your compliance or show cause why you need not comply.”

The Attorney General’s office has not yet responded to a request for comment.