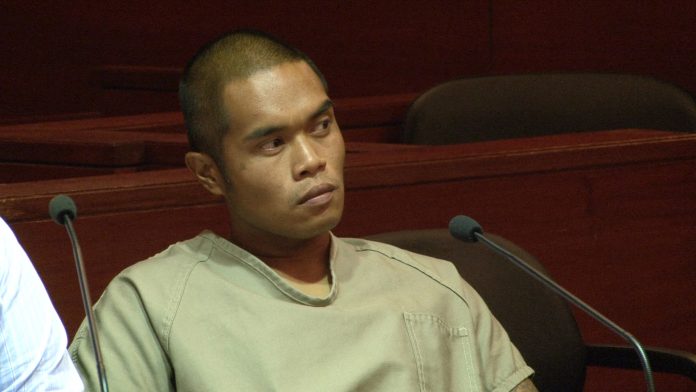 This is the second time Carl Gargarita will be facing trial after his manslaughter conviction was overturned by the Supreme Court.

Guam – Carl Gargarita may have a stronger defense for his trial the second time around. Judge Maria Cenzon approved a forensic pathologist for the defense team.

Gargarita’s manslaughter conviction was overturned by the Supreme Court because of inadequate jury instructions so he’ll be getting a second trial after being accused of choking Anthony Giralao to death.

In September this year, Carl Gargarita won his appeal in the Supreme Court after he was convicted last year of manslaughter and sentenced to 10 years in the chokehold death of Anthony Giralao.

Gargarita does not deny he choked Giralao after the two had gotten into a fight back in June 2013 at a Tumon parking lot, but Gargarita says he was acting in self defense and that it was Giralao who swung first.

He’ll be getting a second trial, but this time, his defense could be stronger with the request of a forensic expert to examine evidence.

“If I was to use it in court, at this point what we’re requesting for is an expert to analyze the evidence to give us information as defense in order to prepare for this trial once again,” noted Peter Sablan, Gargarita’s defense attorney.

Lead Prosecutor Jonathan Quan said they did not oppose the motion. “The people perceive the moving pictures to be sufficient already,” he said.

Judge Maria Cenzon noted that the approval of an expert witness could delay the trial. But Gargarita himself stated he was willing to wait.

With that, the judge approved the motion for a government funded forensic expert with the amount not to exceed $1,500. Any amount over $1,500, she said, would have to be approved by Judiciary of Guam Administrator Joshua Tenorio.

The trial date of January 20 was vacated and Judge Cenzon said she would issue a new scheduling order at the next hearing which is scheduled for February 2 at 9:30 am.

Judge Cenzon also stated that she would be issuing a decision soon on Gargarita’s motion for pre-trial release.