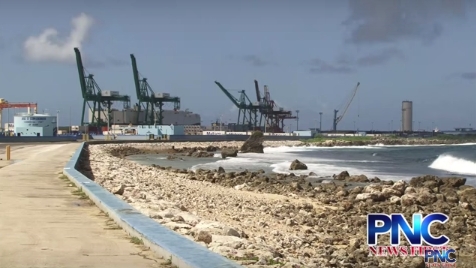 The hearing is tentatively set for September 8.

Guam – The Port Authority and Guam YTK were in court today to set a date for when both sides will present arguments for and against the $14 million dollar judgment an arbitration panel levied against the port earlier this year.

“The legislature, I think, could argue that the separation of powers doctrine is triggered when you have a panel or a court decide that a law mandating that they consent and agree to any conveyances of land of any interest, that’s going to be ignored, then its real clear, at least in my opinion that that doctrine of separation0 of powers is something the legislature would want to discussed specifically,” said Phillips.

Phillips says he’s argued this point from the beginning. He says the Guam YTK lease has always been illegal because the legislature did not approve the original contract. The arbitration panel however disagreed with this argument and awarded $14 million to Guam YTK. Judge Sukola declined to send an invitation to the legislature and AG, saying in part that both entities know about the case and if they want to file a brief, they are free to do so. Additionally, Judge Sukola questioned Phillips as to why the AG would be invited when they originally signed off on the lease in 2001.

“So then the judge asked how would they get around potential conflict and at least my position is that’s not for me to argue and I wasn’t arguing one way or the other I was requesting that they be invited and the court made clear if they want to file a brief they can ask,” said Phillips.

Back on on May 19 Guam YTK filed a motion in superior court to uphold the arbitration panel’s decision. Phillips indicated that the Port would oppose Guam YTK’s motion on Monday and file its own motion to set aside the arbitration award by July 5. Phillips additionally asked Judge Sukola to consolidate both hearings on one day—September 8.

Meanwhile, Attorney Genevieve Rapadas, counsel for Guam YTK maintained the award be upheld. In a statement to PNC Rapadas states “We understand the Port is unhappy with the result, but the grounds to vacate an arbitration award are very limited and no such grounds even remotely exist in this case or have been raised by the Port. We are confident the court will confirm he award.”