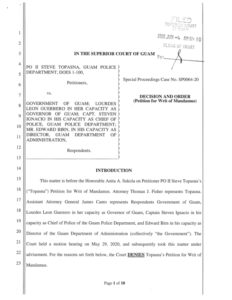 Superior Court Judge Anita Sukola has dismissed a lawsuit filed by attorney Tom Fisher on behalf of a Guam police officer seeking to force GovGuam to provide him and other frontliners with double pay.

Among her findings, Judge Sukola ruled that GPD officer Steve Topasna “failed to demonstrate that the Guam Police Department is closed.”

The closure of an agency during an emergency is one of the requirements under the current law in order for double pay to be given to an employee called in to work at a closed agency.

“The factual record before the Court is insufficient for the Court to determine whether the Guam Police Department is closed,” wrote Sukola in her decision. “Topasna has failed to allege the facts necessary to demonstrate that Rule 8.406 is applicable to him, and the Petition therefore fails.”

In conclusion, she wrote:

In a statement to PNC, Attorney Fisher said – “We are looking at taking the matter to the Supreme Court. We feel the facts are on our side, the law is on our side and principles of decency as well. We expect to ultimately prevail”.

The Office of the Attorney General also issued a statement on Sukola’s decision:

At the start of this case, we said that the court would be bound by the rules. In today’s decision, the court raised the same issues identified in our legal opinion and came to the same conclusion: the rule as written requires a facility to be closed and an essential employee to remain on duty while others employees are on excused leave in order to qualify for double pay or compensatory time off. But being right does not always mean winning. We have consistently pointed out the inequity that would result from following the rules.

Officer Topasna has the right to appeal the court’s decision to the Supreme Court. However, we do not expect the result will be different because neither our office nor the courts have the ability to rewrite our laws. Litigation cannot serve as a substitute for legislation.

That power rests solely with our Legislature.