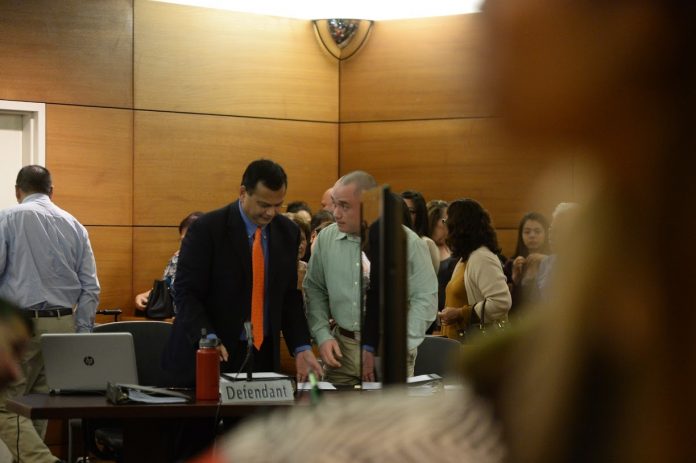 A motion to suppress hearing continued in Superior Court today where two police officers and a Guam firefighter testified about the scene of the shooting.

The defense got a chance to cross examine Dededo Precinct Supervisor Officer Barry Flores two days after the prosecution interviewed him on the witness stand as a police body cam footage was played in court.

That body cam footage, taken after officers arrived to the scene of where Police Officer Sgt. Elbert Piolo was shot, is the subject of a motion to suppress. The defense teams wants Judge Michael Bordallo to deem the footage as inadmissible as evidence.

Torre is facing murder, manslaughter and aggravated assault charges, accused of shooting Piolo to death in a drunken rage as Piolo dropped him home after a night out.Officer flores testified that prior to arriving at the scene, he was informed by dispatch that two officers were involved in a shooting and that Piolo had been hit.Under cross examination, Torre’s defense counsel Attorney Jay Arriola questioned Flores whether it had ever been relayed to him that Piolo had told dispatch himself “he shot me.”

Flores, however, said that was never the case prior to arriving at the scene in the early morning hours of July 13, 2015.Several other witnesses testified including Police Officer John Edwards who was wearing the body cam. On the stand Edwards also testified that he received the same information as Flores–that two officers were involved in a shooting–nothing about Piolo identifying his killer.On direct examination, Prosecutor Phil Tydingco asked Edwards what he understood to be the situation prior to arriving at the Yigo residence. Edwards said he was under the impression that both Piolo and Torre were involved in a firefight with possible suspects and that Piolo had been shot by an unidentified suspect.This information is crucial for Arriola’s motion to suppress the body cam footage as evidence for the trial. Arriola says Torre was not read his Miranda rights at the time the body cam was rolling, which is approximately 50 mins.

Tydingco, however maintains that Torre was never considered a suspect during those 50 minutes. In fact, Edwards pointed out that throughout the interview of Torre at the scene, he was under the impression that Piolo died of a self-inflicted gun shot wound as that was what Torre had implied.Judge Michael Bordallo took the motion under advisement. He will have to decide whether the body cam footage is admissible as evidence.