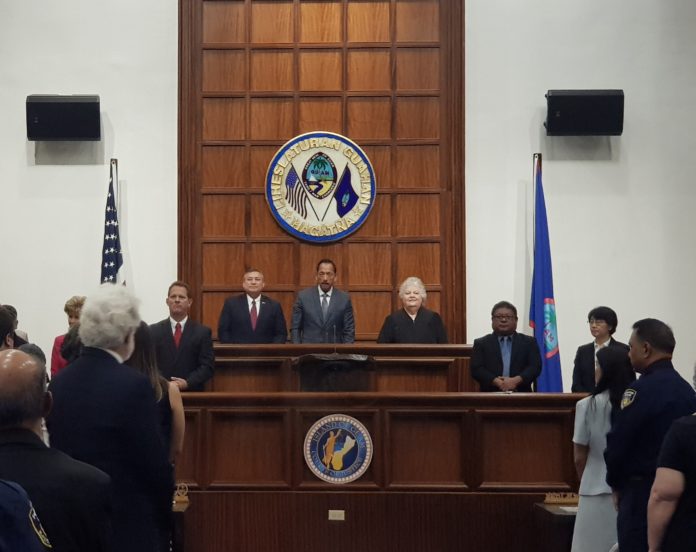 Guam – The Judiciary branch of the government is being shafted, at least that was the sentiment given in yesterday’s State of Judiciary address.

Despite feeling the ill effect of the government’s financial crisis, Chief Justice of Guam Katherine Maraman reports that the Guam Judicial System is healthy.

As the new fiscal year approaches Chief Justice Maraman made it a point to address the Judiciary’s budget request of $36.7 million dollars.

She stated that the request represents 5-percent of the total estimated General fund appropriations and that the budget would fund operations with a focus on filling critical vacancies, implementing legislative mandated reclassification of all personnel, starting the electronic monitoring program, and giving adequate financial resources to the under funded indigent defense services.

The Chief Justice fears that a repetition of pleas for resources from many GOV GUAM entities would result in listlessness.

“We fully recognize that belt-tightening is a necessity to be borne by all of us who work in service to our people. For the record, we have responsibly managed our dwindled resources by increasing efficiencies across all of our divisions, but cutting corners will inevitably come at the cost of serving the public. We have been transparent in this process,”stated Chief Justice Maraman

The Judiciary fears they will be shafted out of the proper funding required to deliver justice effectively. Chief Justice Maraman stated, “I ask that you hold the line and not think that when the judicial branch budget comes before you that we are just another agency. We are more than that. We, a separate and co-equal branch of government, play a critical role in public safety, in protecting children, in resolving family disputes, and maintaining commerce by adjudicating business disputes.”

“As for the Judiciary the Branch I stand for in this framework. I ask my sister branches to give us the basic means to continue to serve our people and out government as we should. I submit to you that our budgetary request represents a merely sustainable budget,” proclaimed the Chief Justice.

She Further asked for the Legislature to move forward with confirming the appointment of John Quan as the New Magistrate Judge.

Citing that backlogs drive up local incarceration costs, put the rights of the accused in jeopardy, impact businesses’ ability to operate in Guam and Micronesia, and harm families. Adding a new judge is necessary to ensure the effective and efficient delivery of justice.