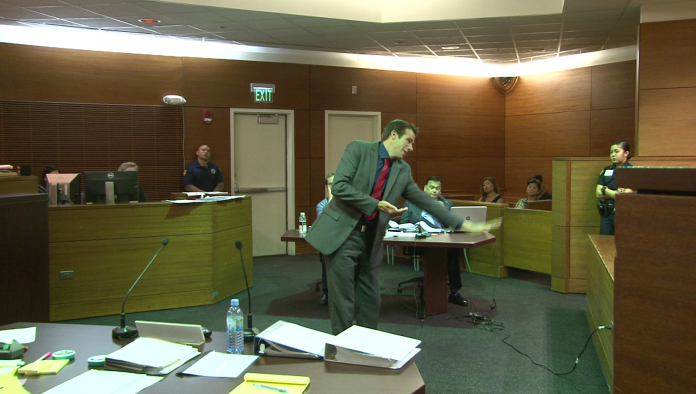 Closing arguments were made today in Superior Court.

Guam- After seven days of witness testimonies, legal counsels in the Michael Ehlert criminal sexual conduct case provided their closing arguments. It is now up to the jury to determine Ehlert’s fate.

It was an animated courtroom as Assistant Attorney General Matt Heibel and Defense Attorney Jay Arriola presented their closing arguments to the jury. Both argued various points of the case, going through the testimony of each witness that took the stand.

A total of five victims came forward in this case, but only three of those victims’ allegations were charged against Ehlert. Attorney Matt Heibel pointed out Ehlert’s MO in three of the alleged assaults appear to begin with Ehlert approaching them in the water from behind.

He further points out the changes made in Ehlert’s written statements provided to the University of Guam during the course of their internal investigation. Ehlert is a psychology professor at the university.

“We went through [the UOG investigator’s] testimony. A couple differences between [Ehlert’s] first and second statement. ‘I did not intentionally touch any of my students.’ That was his first statement late November,” Heibel told jurors. “He kind of walks that one back a little bit. ‘I may have draped my arm around H.P. while I was chatting with her.'”

Heibel also went into Ehlert’s alleged demeanor at the “Stroup Party” held at Ehlert’s Ipan residence and the alleged “crawl” swimming stroke. According to Heibel, Ehlert’s description is physically improbable.

Ehlert’s Attorney Arriola rebutted, stating that Ehlert sexually assaulting all three women while they were in the water was also physically impossible. Arriola noted that of all the witnesses, Ray Chaco was the only reliable testimony as he was not intoxicated at the time of the alleged incident. Adding,

“And what did Ray Chaco say? ‘I looked over at H.R. There was H.R. Ehlert was about five feet away … in between Ehlert and H.R. were two other guys,'” Arriola said of Chaco’s testimony.

The jury is now in deliberations. It is now up to these fact finders to determine the outcome and fate of Ehlert.

Judge Vern Perez did not grant the defense’s request to sequester the jury.