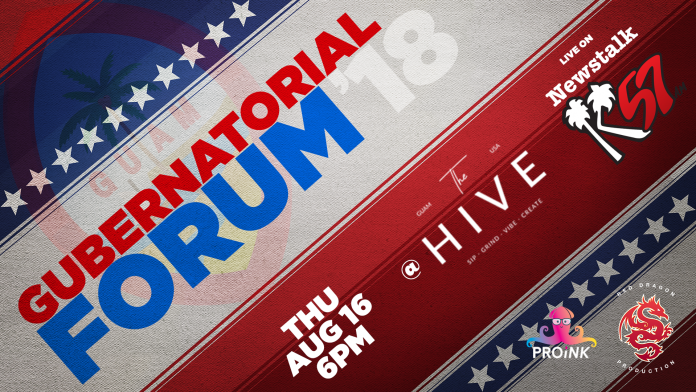 The countdown is on! Just another day or so till voters drop their ballots in the box during this Saturday’s all-day primary election, with a momentous quadrennial gubernatorial race at the top of the slate. And just count ‘em! Four contenders in the Democratic governor’s race alone! This past week, Newstalk K57 drive-time and midday radio announcers Patti Arroyo, Andrea Pellacani, and Phill Leon Guerrero hosted a gubernatorial forum at The Hive in Tamuning. Three of four Democratic hopefuls showed up to remind the electorate what each of them stands for.

For a deeper look at the challenges these governor’s race contenders face, check local listings for the full program. For now, here is just a slice of what you can expect to watch during the full hour.

Bank of Guam President and CEO Lou Leon Guerrero says now, more than ever, the island needs someone with a  modern business background to see the bigger picture and make the high level connections to leverage the digital economy and fast-track Guam into the core of the 21st Century.

“I’m running because I’m very, very upset about the way that this government has been running,” Leon Guerrero said. “It has lacked addressing very, very important issues: healthcare, education, public safety, and the finances are in chaos! And so I feel, with my experience in banking and financing, that I can provide a better [expertise] to resolving it.”

Former governor Carl Gutierrez says experience, a track record of success, and a moment’s-notice resourcefulness are the keys to pulling the island out of the morass.

“I have been Governor of Guam for eight years, Speaker for four years, Chairman of Ways & Means for six years. And the situation we’re facing now requires an experienced person to be able to extricate ourselves from this mess,” Gutierrez said. “And so I’m here to be able to prep myself, with our theme that Guam has lost control, and we want to make Guam, Guam again—bring the Guam back that we know.”

“You have my numbers; you can call me or text me anytime of the day,” Rodriguez said. “I won’t hide from you. As you know, you don’t have to talk to a staffer to get to me. You can call me directly. And so, that’s how I’m gonna lead. That’s how every government agency is gonna operate under my direction. And so that’s just the way we need to be—is transparent.”

The fourth Democratic gubernatorial candidate on the Democratic side of this Saturday’s primary election ballot is Sen.  Frank Aguon, Jr. He was unable to make the forum, due to a scheduling conflict.

You can catch the full one-hour Newstalk K57 Gubernatorial Forum ’18 during replays on FOX6 and ABC7. Just check the FOX6 and ABC7 schedule slides appearing between television programs.