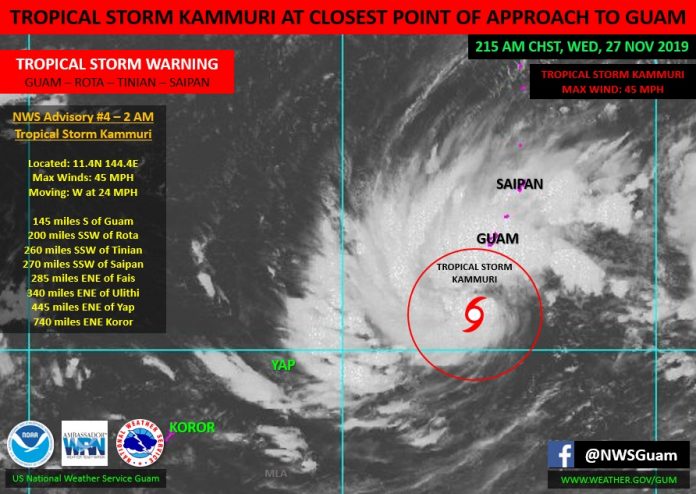 The National Weather Service continues to monitor Tropical Storm Kammuri. Kammuri made its Closest Point of Approach (CPA) to Guam around 2:30 a.m.

As of 4 a.m., Kammuri was located 11.5 degrees north latitude and 143.5 degrees east longitude, about 160 miles southwest of Guam. Tropical Storm Kammuri will continue to move toward the west and away from Guam and Saipan.

Guam remains in Condition of Readiness (COR) 2 at this time. At COR 2, the community is reminded to stay indoors and remain off the roads, allowing access for emergency response personnel.

Even though Kammuri made its CPA early this morning, Guam can still expect damaging winds of 30 to 40 mph with gusts up to 50 mph. Winds will likely decrease later this morning, possibly early afternoon, but windy conditions and hazardous seas will persist throughout the day.

A high surf warning remains in effect for Guam, Rota, Tinian, and Saipan. Dangerous surf of 15 to 25 feet remains possible along north and east facing reefs. Life-threatening rip currents will persist through early next week. The community is reminded to avoid the ocean.

A flash flood warning is now in effect for Guam until 8:15 a.m. Wednesday, meaning that flooding is imminent or occurring. Moderate to heavy rain is expected across Guam from southeast to northwest. Up to 2 inches of rain has fallen since midnight across much of the island, and 2 to 3 inches of additional rain is likely through 8 a.m.

Turn around, don’t drown when entering flooded roads. Seek alternate routes if you encounter a flooded roadway.
Avoid walking or driving through flood waters.
Just 6 inches of moving water can knock you down, and 2 feet of water can sweep your vehicle away.

If there is a chance of flash flooding, move immediately to higher ground.

If floodwaters rise around your car but the water is not moving, abandon the car and move to higher ground. Do not leave the car and enter moving water.

Avoid camping, parking, or hiking along streams, rivers, and creeks during heavy rainfall. These areas can flood quickly and with little warning.

The Government of Guam will remain closed while Guam is in COR 2. All military bases continue normal operations at this time.