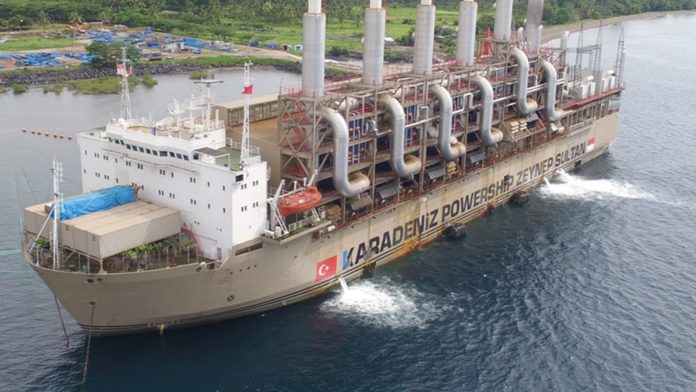 Guam – A company called Karpowership says they can offer over 200 megawatts to Guam’s power system on a floating power plant that would cost less than the construction and operation of the powerplant that the Guam Power Authority is proposing.

The company that is based in the country of Turkey says it can provide the GPA with the 180 megawatts of power it needs from liquid natural gas on a floating power plant. Karpowership local representative Marcel Camacho believes this is a better alternative to GPA’s current plans to build a new power plant in the north.

“Karpowership is offering an affordable clean and efficient power source for the island,” said Camacho.

“The Clean Air Act, U.S. EPA is imposing fines on those old and inefficient power plants to the tune of about 39 thousand dollars per day and that’s per generator. I’ve heard John Benevente state publicly that we owe about 150 million dollars in fines. He hasn’t paid it yet but that’s where we are today and those fines keep accumulating,” said Camacho.

“We use them in a combined cycle mode meaning we utilize the excess heat from those engines and run an additional steam turbine to generate additional power so that increases the power output of the engines and the ship itself. And also, because that extra heat that we use for power generation decreases the fuel consumption of the overall power plants so it becomes even more efficient,” said Kumbasar.

Camacho says the Karpowership can keep fuel costs down by using liquid natural gas which has a more stable price than oil. In addition, the karpowership company has good relationships with the major suppliers of LNG. If they get a contract with GovGuam to provide power it will include the cost of fuel which will allow GovGuam to lock in rates so to speak. Camacho says this would eliminate the levelized energy adjustment clause or LEAC rates that have been increasing as the cost of oil increases.

Camacho says the powership would be moored at the Port Authority of Guam near the areas where containers are currently off-loaded. While docked there it will be plugged into the Guam power grid via some minimal infrastructure that the Karpowership company will construct and supply. But what would the powership do in the event of a super typhoon?

“We want to protect the ship in the event of a super typhoon so the contingency plans elsewhere in the event of a category four or stronger typhoon looking at possibly a direct hit, we would need to unplug the ship. And typically, they can do that within an hour our two and then have the ship sail away and we are estimating that whole period of time for it to be in an area where it’s safe is about 24 hours or less. And then once the eyewall clears we can begin to move the ship back in and have it moored again in less than 24 hours,” said Camacho.