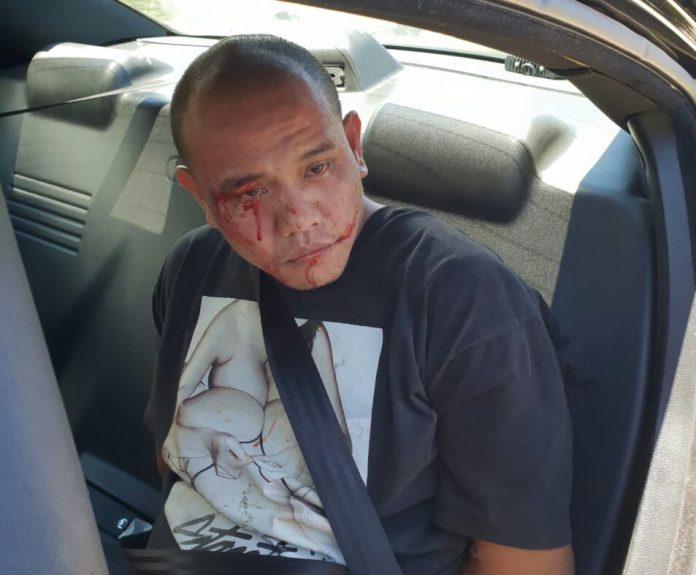 Guam – A manhunt for the suspect who kidnapped and brutally beat a woman Friday has finally come to a close.

A man hunt for Brian Kevin Cruz has come to an end as police confirm that he has been apprehended. The search for Cruz began after he allegedly kidnapped Piatra Tuncap three days ago.

It was on Friday at 5:15 p.m. that surveillance footage captured Cruz and Tuncap engaging in a verbal confrontation. Cruz is then seen exiting a white Nissan Sentra, grabbing Tuncap by the neck, forcibly shoving her into the car and then driving off.

The video went viral on social media as family and friends spread the word of her disappearance.

According to GPD Spokesman Sgt. Paul Tapao, the family was able to locate her in Chalan Pago. But for nearly 24 hours Tuncap’s whereabouts were unknown. During her captivity Cruz allegedly beat her until she was barely recognizable. The injuries she sustained were so severe that she required medical attention and was take to the Guam Memorial Hospital. Sources close to the victim indicate that she is now recovering well and with no complications.

The same sources also confirmed that the vehicle used in the kidnapping was recovered at Tagachang Beach shortly after Tuncap was found. The vehicle was abandoned and the interior burned.

Her captor was on the loose for nearly three days and was a priority for law enforcement authorities as he was considered armed and dangerous. Cruz is no stranger with the law as he reportedly has a history of violence. His rap sheet details an arrest in 2013, stemming from his involvement in a purse snatching incident.

This afternoon, police apprehended Cruz after a high speed chase in Mangilao. As you can see in the photo circulating social media, Cruz appears bloodied and bruised.

GPD has not indicated the charges pending against him however they may include, kidnapping, aggravated assault, assault, felonious restraint, family violence, eluding police officers and resisting arrest.