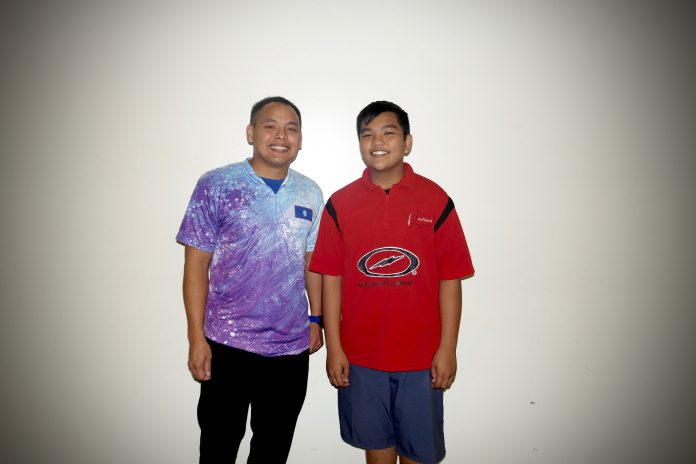 GUAM -Ray San Nicolas claimed his first title of the year via a 203-173 victory over fellow national team mate Jay Leon Guerrero during the Budweiser King of the Lanes monthly contest held on Sunday, October 16, 2016 at the Central Lanes Bowling Center.  With the win, San Nicolas joins nine other monthly champions in etching his name for the year end grand finale.

2nd seed San Nicolas bullied 8th seed Dante Godoy in the semi-final round with a cluster of strikes on his way to a 279 game against Godoy’s 218.  Leon Guerrero eliminated top seed Gregory Borja in the opposite bracket 224-176 to set up the finale.

The six game qualifier held earlier in the day was dominated by the members of the National Team as they occupied the top four slots. Borja smashed the pins steam rolling games of 245, 245, 247, 214, 266 and 193 for a 1410 total averaging 235 pins per game.  San Nicolas jumped from 12th place to second after missing a perfect game by a pin ten leave in the last game of the qualifier to edge Timothy Nauta by a stick 1255 to 1254.  Cesar Villanueva finished in fourth with a 1246 set followed by Victor San Nicolas Jr., Zayne Zamora, National Team Captain Jay Leon Guerrero, Godoy, Manny Torre, while Ricky Duenas beat out Paul Thompson in a one ball tie breaker to round off the top ten who advanced to the elimination rounds.

The path to the Aloha Maid Prince of the Lanes Grand Finals just got a little sweeter for Jeremiah Camacho as he reserved his slot for the year end event with his first victory in the 2016 monthly edition.  Camacho defeated 8th seed Ashton Surber in the November finals with a 207+8 to 188+11 tally.  Camacho opened an early lead as Surber mishandled a single pin spare on the second frame.  However, Surber strung a four bagger to take the lead on the sixth frame.  Camacho returned the favor with a four bagger of his own including a strike on the tenth frame that sealed the deal as Surber was unable to continue his string.

Camacho ousted Leody Ersando 201-167 while Surber routed 2nd seed Cliff Palomo in the semi-final matches that would set up the finals.  Surber’s other matches included wins over 4th seed Richard Dahill in the quarter final round 192-165 and 3rd seed Noah Taimanglo in the first round 212-187.