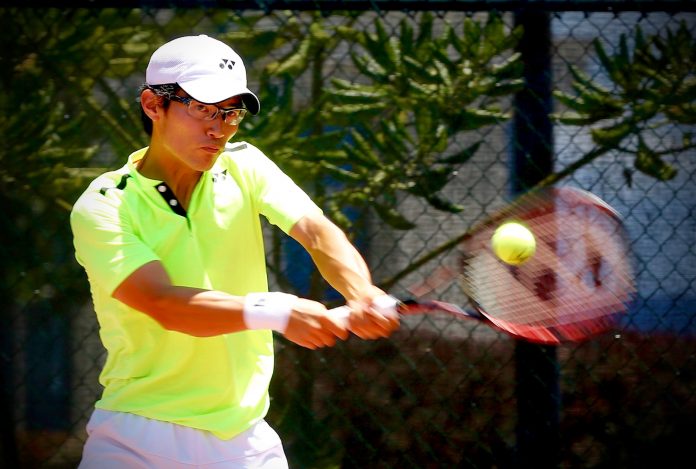 Before the start of the first singles matches, a short opening ceremony with speeches from Guam National Tennis Federation President Torgun Smith and ITF Supervisor Scott Ray was held on Court 1 with all visiting officials, representing Australia, China, Japan, Korea Republic, and Taiwan, as well as local officials.

In other Singles event matches Monday, No. 4 Deiton Baughman of the United States is through to the second round with a 6-1, 6-4 win over Japan’s Ken Onishi. No. 7 Masato Shiga of Japan, and finalist in the 2013 edition of the tournament, defeated Korea Republic’s Yong-Kyu Lim 6-3, 6-4. Qualifying draw winner Koichi Sano defeated Australia’s Winter Meagher, also a qualifying draw winner, 6-1, 6-2. Seong-Gook Oh of Korea Republic, a winner from the qualifying draw, defeated Wild Card Ren Nakamura of Japan 6-4, 6-4. In the day’s other singles match, Wild Card Yutaro Matsuzaki advanced to the second round after opponent Tyler Hochwalt of the United States retired with an injury. Matsuzaki won the first set 6-4 and was trailing 1-3 in the second set before Hochwalt retired.

In the Doubles draw, all seeded pairs playing Monday are through to the quarterfinals. No. 1 Toshihide Matsui and Andrew Whittington defeated Tadayuki Longhi and Koichi Sano of Japan, 6-1, 6-3, No. 2 Katsuki Nagao and Hiromasa Oku defeated Neeraj Elangovan and Tetsuro Habusawa 5-7, 6-2, 10-5, and No. 4 Takuto Niki and Shuichi Sekiguchi defeated Jake Delaney and Ken Onishi 6-2, 6-4.

Japanese tandem Gengo Kikuchi and Shunrou Takeshima booked a spot in the quarterfinals with a 6-2, 6-3 win over Ju-Hae Moon and Ko Suzuki. Another Japanese pair, Masakatsu Noguchi and Masaki Sasai also reached the quarterfinals with a 6-0, 6-1 win over Wild Cards Mark Oljaca and Kline Sack, both of the United States. Matthew Brooklyn and Andrew Dottino defeated Australian pair David Barclay and Steven Goh 6-4, 7-6(9).

The tournament continues through to Sunday.