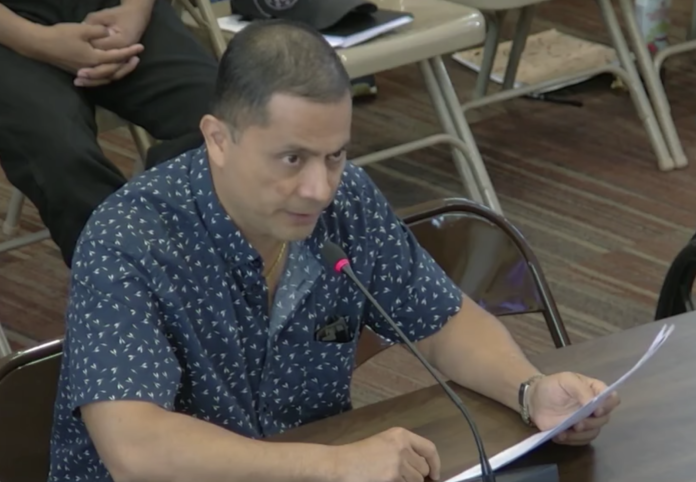 On Tuesday, Topasna testified at an oversight hearing for the Guam Regional Transit Authority where he claimed that Kloppenburg had been debarred by the Guam Department of Administration.

“A 2012 review by the Office of Civil Rights … that’s part of the Federal Transportation Administration identified 33 findings, some of which may be directly attributed to the operations of the current contractor,” Topasna testified. “At one point, the current contractor had been debarred by the Department of Administration and this decision was upheld by the court for non-conformance to ADA standards.”

The oversight hearing was held by the Committee on Transportation following an alarming audit report by the Office of Public Accountability that found GRTA had misused over $670,000 in funding, some of which was attributed to overbilling by contractor Kloppenburg Enterprises.

Vice President Brad Kloppenburg was two seats away from Topasna when he made these claims and was quick to deny them. Now, two days later, President Bruce Kloppenburg says they’re going to take Topasna to court.

“I don’t know where he came from, but he said some pretty derogatory statements in there, one that we’re gonna really look into is that we have been debarred by DOA,” Bruce told NewsTalk K57 host Patti Arroyo. “To our knowledge we’ve never been debarred by anybody anywhere at anytime in 55 year of doing business on Guam. That’s news to us, that was an outright lie.”

We spoke with Topasna today to get more information on his claims and he says he had copies of a letter from a company requesting for DOA to have Kloppenburg debarred. Topasna claims the matter was taken to court and later upheld.

Still, Kloppenburg believes Topasna has a personal agenda against GRTA and KEI, noting that Topasna had been fired from GRTA and the Governor’s Office, which Topasna himself confirmed, telling the Transportation Committee that he was forced out of his Adelup job when he opened his mouth about alleged corruption at the mass transit agency.

“I’m gonna take it as far as I can to clear up our name. We don’t deserve any of this. We provide an excellent service. We’re making good progress, I feel,” said Bruce Kloppenburg, adding that Topasna’s statements are public and are now part of an official record.