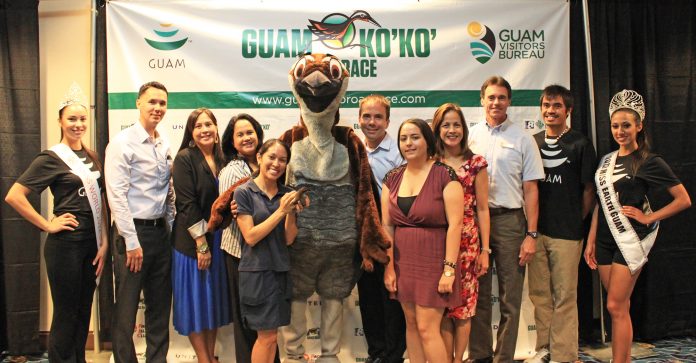 Japan’s Masashi Shirotake, the Guam Ko’ko’ Road Race Half Marathon two time defending champion, is returning once again to defend his 2011 course record time of 1:12:43, courtesy of United Airlines.  Competing for the first time this year is Amy Atkinson, who has just returned from the 2012 London Olympics where she represented Guam in the 800 meter run.  Also running this year is Guam Olympian Derek Mandell, who won the Guam Ko’ko’ Road Race Half Marathon in 2009 and also competed in the 800 meter event in London this summer.

Top finishers in both events will win up to $5,000 in total prize money.  The 1st, 2nd, and 3rd place male and female overall finishers in the Half Marathon event will be awarded $1,000, $500, and $250 respectively.  The 1st place team overall in the Ekiden Relay event will be awarded $1,000.  In 2011, more than 1,600 total runners participated in the Guam Ko’ko’ Road Race, over 600 of whom were from Japan.  Race registration projections estimate a record number of runners will compete in the 2012 event.

“We look forward to welcoming runners from across the globe to this exciting event,” said GVB Deputy General Manager Nathan Denight.  “The annual Guam Ko’ko’ Road Race provides opportunities for the local community and visitors alike to enjoy Guam’s beauty as a top cultural and resort destination.”

This year marks the seventh anniversary of the race, which is a half marathon solo and ekiden relay (4‐person team) road race.  The race starts and ends at Governor Joseph Flores Memorial (Ypao Beach) Park.  The race course showcases the villages of Tumon, Tamuning, Asan, and the capital city of Hagåtña.  Additionally, there will be cheering groups along the race course from the community, as well as cultural entertainers.  The International Association of Athletics Federation certified the race course as officially 13.1 miles long.  Touted as one of Guam’s signature sports tourism events, the Guam Ko’ko’ Road Race attracts visitors to Guam as well as benefits Guam’s indigenous Guam Rail, also known as the ko’ko’ bird.

Efforts in conjunction with the Department of Agriculture, Division of Aquatic and Wildlife Resources raise awareness for the plight of the flightless bird and help preserve this endangered species.  ’Che’lu’ is the official mascot for the Guam Rail and interacts with the community of Guam and visitors, endearing them to Guam’s territorial bird.  ‘Che’lu’ and a live ko’ko’ bird made special guest appearances at today’s press conference, educating and entertaining the attendees.

Online registration is open through the October 10 closing deadline at http://www.guamkokoroadrace.com/.  The registration fee for teams that participate in the school division for the Ekiden Relay has been set at just $40, or $10 per runner, to encourage as many students as possible to participate.