Guam – United Airlines, presenting sponsor for the 2013 Guam Ko’ko’ Half Marathon and Ekiden Relay, and the Guam Visitors Bureau presented roundtrip United Economy tickets on Monday to the two grand raffle prize winners from the race that was held on Oct. 20, 2013.

The winners, Ken Murphy and Brian Lassiter, were drawn at random from among an event-record number of 2,106 race registrants. They will be able to
redeem their tickets to fly anywhere in Asia or Micronesia or to Cairns, Australia.

“Being able to offer our runners raffle prizes of this magnitude shows just how much support the Ko’ko’ Race continues to receive every year from businesses like United,” said Karl Pangelinan, general manager of GVB. “It’s this community effort that has made the Ko’ko’ Race such a popular event for GVB attracting thousands of local and overseas runners every year.”

Both Murphy and Lassiter ran the Ko’ko’ half marathon, joining close to 1,100 other local and regional runners on the half marathon course. The course began at Governor Joseph Flores Memorial Park (Ypao), ascended up JFK Hill toward Kmart, and took a right turn down Route 1/Marine Corps Drive to just past Adelup, where the runners made the turn and ran the same course back. The race ended with a festival in Ypao Park.

Sports tourism is a growing contributor to tourism in Guam, the island’s number one industry. In its eighth year, the Ko’ko’ Half Marathon and Ekiden Relay has become a signature event for GVB and the island. 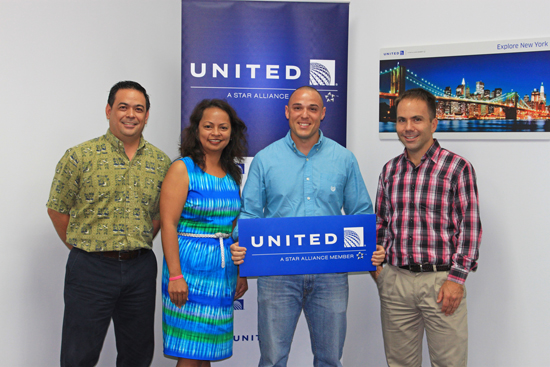