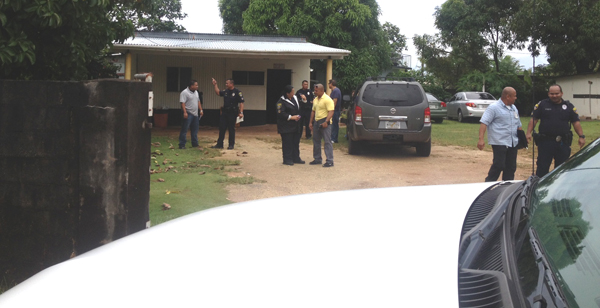 Guam – Guam Police now say that a man who was reported shot earlier in the day, may not have been shot.

The latest release from Guam Police Spokesman Officer A.J. Balajadia says that the Korean man has been treated and released from GMH. And, according to Officer Balajadia, a GMH Emergency Room doctor told detectives that the victim “was possibly shot or struck in the head by a Blunt Force Object.”  He could not say which.

According to Officer Balajadia, the victim, who is Korean, told responding officers at the scene, before he was brought to GMH, that he had been shot.

It is not clear whether language was a barrier in communicating what had happened to him.

GPD Spokesman Officer A.J. Balajadia told PNC News that the call came in at 9:40 am. The victim,  he said, is an adult Korean male who was taken to GMH after receiving a wound to the upper body.

Earlier this afternoon, GMH Nursing Supervisor Cely Mangrobang told PNC News that the man was “stable, awake and alert”  in the trauma room being interviewed by police.

Yeong Manufacturing is located in a small tin roofed shack on Quichocho Street in Mangilao. They are a wholesale sushi maker for local restaurants and hotels.

The suspect is described as being possibly a Chamorro male with a Chamorro female operating a Black colored SUV.

Anyone with information about the crime is asked to call Guam Crime Stoppers at: 477-HELP.