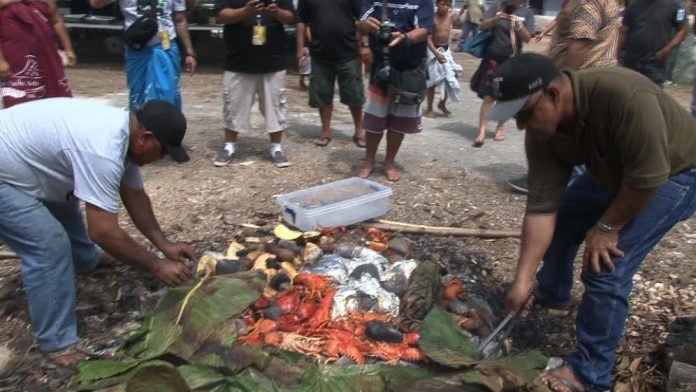 Kosrae shows us how to prepare an earth oven or ‘um’ and Guam lets us eat some fiesta food!

Duenas said, “We have a tasting going on. We’re doing BBQ spareribs, short ribs, red rice, kelaguen. We’re also smoking octopus and pork. Just doing it the local way with a modern twist.”
He said the Guam station even has a hotnu, or oven, where they bake bread.
“We’re sharing our cooking practices and we’re seeing a lot of similarities and differences. It’s interesting. We have GCC Culinary Students who are apprenticing under us and Kosrae so they’re learning the different processes,” said Duenas.
Next, we visited Kosrae where they were showing visitors their traditional way of cooking with an earth oven or what they call ‘um’.
Kosrae Delegate Grant Ismael explained, “We’re doing ‘um’ traditional earth oven, the way of cooking food using rocks and covering it with traditional leaves. We have inside the ‘um’ some crabs, lobsters, taro, fish, breadfruit, chicken, all the good stuff for everyone to eat.”
Kosrae Delegate Grant Ismael demonstrated how they prepare the ‘um’.
He said, “First, we would burn the wood. Then on the wood, we’d put the lava rocks on the wood. By the time the wood is all burned, the remaining rocks will remain hot and red. We spread it around like a circle, put food around it and cover it with special leaves for the ‘um’.”
Ismael said preparing food using ‘um’ is a big part of the culture in Kosrae. “Absolutely, it’s a part of our everyday lives in Kosrae where every Saturday, we would do the ‘um’. It’s kind of a tradition where we do ‘um’ on Saturday and we eat the food for Sunday. It’s a tradition in Kosrae,” he said.
Ismael invites residents and visitors to say hello to the Kosrae station! Duenas also invites people to come down and get a taste of the Hafa Adai spirit.
“FESTPAC 2016, come check out the culinary hut!” exclaimed Duenas.