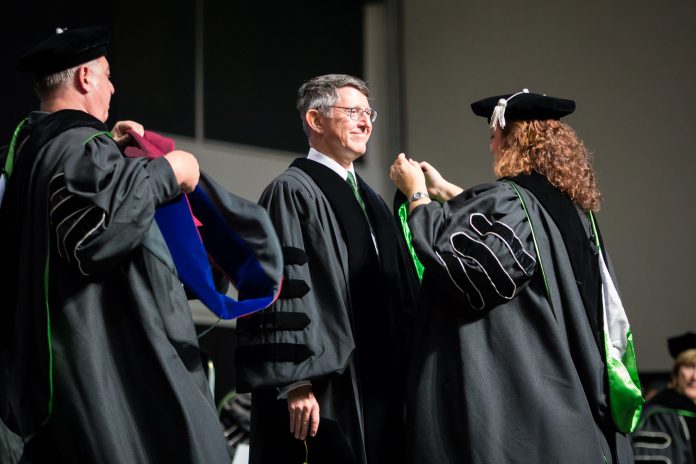 (UOG) –  Dr. Thomas W. Krise formally assumed his role as the 11th president of the University of Guam at the President Investiture Ceremony at 11 a.m. today at the Calvo Field House on the UOG campus.

The investiture was conducted by Chief Justice Katherine A. Maraman before the UOG community and an audience of island dignitaries including Gov. Edward B. Calvo, senators and mayors, military officials, and former regents. Following the swearing in, the UOG Board of Regents presented Krise with the Medallion of Office, the University Charter, and University Mace.

Krise, a retired U.S. Air Force officer who most recently served as president of Pacific Lutheran University in Tacoma, Wash., was selected by the UOG Board of Regents among 60 applicants to succeed Dr. Robert A. Underwood as president. Krise started at the University on Aug. 6 and will serve for five years.

Former presidents of the University of Guam: