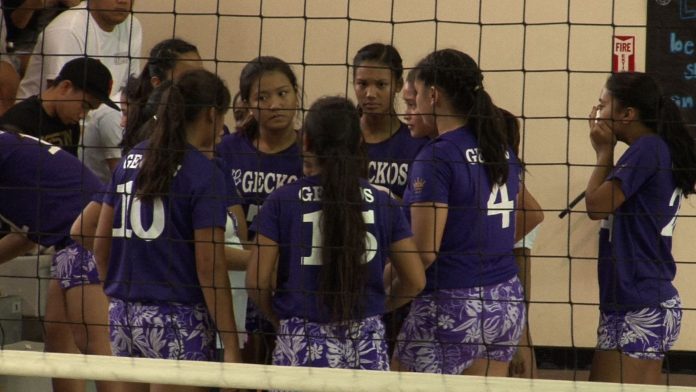 Geckos are returning 6 players from their Championship Team last year.

AGANA – IIAAG Girls Volleyball. A rematch of last fall’s championship game. Academy. GW. Geckos are returning 6 players from their Championship Team last year. Including Sia Duenas and the Quninata sisters, Colleen and Samantha. Academy’s Renee Fiona came out looking to get her team on the board first but Sia Duenas and Sam Quniata say not this time they stop the Cougar scoring surge and take the first set, despite an Academy rally. 25-18. Second set, G-DUB feeling it and grooving. They start the 2nd on a 5-0 point run. Cougar’s Joie Blas, Amara Borja and May Sanchez all try to close the point gap. They did just that, Cougars even held a 2 point lead, but here come the Lady Geckos composed, and focused they battle back. Academy almost force a 3rd, but GW say nah, we good they hold on to win 25-23. It’s their first of the season.

The Lady Geckos, play tonight as they will host the Tiyan Titans in Mangilao. The Mighty Academy Cougars look to bounce back against the Harvest Lady Eagles, at home.