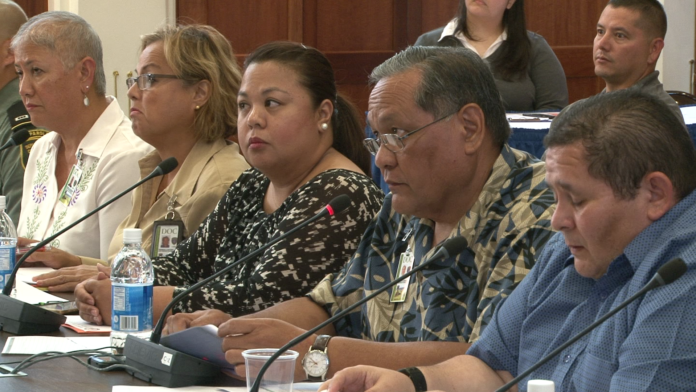 Guam – It was a stormy oversight hearing for the Department of Corrections Tuesday.

After hours of being grilled by oversight chairwoman Sen. Telena Nelson, DOC Director Tony Lamorena interrupted the senator and went on a five minute rant before storming off as the senator attempted to respond.

The oversight hearing started with a slideshow presentation by the Department of Corrections, giving the panel, made up of just Sen. Nelson and Speaker BJ Cruz, a summary of the department’s finances, projects, staffing shortages and recent achievements.

After Speaker Cruz left the hearing to attend a meeting, Sen. Nelson segued into the DOC operations, the real reason she called for the hearing in the first place. Recent brutal assaults, one resulting in death, led to public outcry and a call for more scrutiny on the department’s policies and procedures.

The senator grilled Internal Affairs Officer Capt. Antone Aguon on the department’s standard operating procedures as it relates to the recent cases of assault.

After nearly two hours of a dispassionate barrage of questions, the oversight chairwoman called for the hearing’s adjournment when DOC Director Tony Lamorena interrupted her, going on a five minute impassioned and at times scathing monologue.

“Senator, can I just–with all due respect, the men and women who work at DOC are hard working and dedicated individuals,” Lamorena began.

“You came to visit us when you first came into office and you could only stay with us for less than an hour. We’d like you to come down and see what the facility’s like, what our officers, what our people face on a daily basis. It’s easy to sit up there and just say what you wanna say without having to see what we go through day after day.

“We need your support. As our oversight chair, it is your responsibility to help us so we can accomplish our goals. It’s easy to point fingers.

“Yes we may have made some errors but–these are my line guys! Every one here faces the realities of working in a prison every day.

“Are there gonna be violence in prisons? Senator, go online and google it! Every day there’s going to be altercations in prison, that’s what people are there for because of committed crimes, they’ve committed crimes. We can’t watch every single individual. I have officers who get head butted, who get punched, who get spat at! Their lives are threatened on a daily basis. ‘If you don’t bring this in, I’ll make sure your family, we’re gonna go after your family.’ That’s why I’m losing 30 officers this year, senator!

“And I will fight for these people because they are hardworking, dedicated individuals, senator,” Lamorena ended his rant as he got up from his seat and stormed off.

You can watch the entire oversight hearing here.