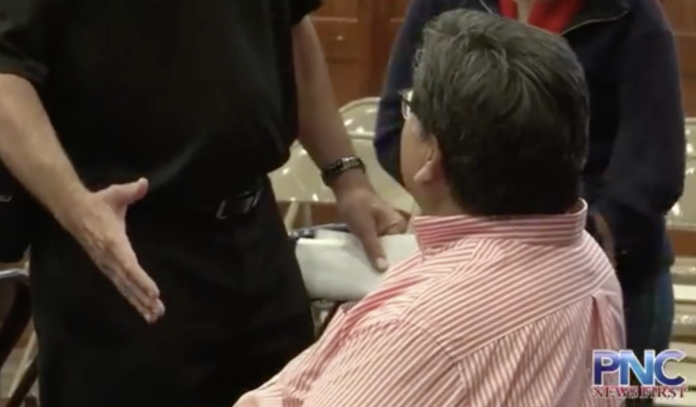 Guam – Department of Land Management Director Mike Borja is refusing to answer questions about proposals to place a moratorium on the agency.

After waiting a day and a half to hear back from him, PNC cornered Borja just before this afternoon’s Chamorro Land Trust Commission budget hearing at the legislature.

Politely asking him if he would interview on camera to answer the handwritten questions we left for him after visiting two Lands Management offices yesterday, Borja again refused, telling us he has no interest in our questions or our coverage.

Reminding Borja that PNC is still awaiting his responses to these questions we left inside his executive office yesterday morning, after he also refused an on-camera interview at that time, Borja once more declined to be interviewed today in person.

The PNC team told Borja we were approaching him as gentlemen instead of accosting him with a microphone in his face. When he asked if we were planning to stop being gentlemen, we offered a handshake, which he also declined.

When PNC reminded Borja that he is a public official whose salary is paid by taxpayers, he still refused to be questioned, vaguely telling us that Land Management Chairwoman Pika Fejeran would be addressing current events affecting CLTC during today’s budget hearing.

But this morning Fejeran had already provided a written public statement saying she was working feverishly to figure out how CLTC’s administrative practices have led to the Barrigada Heights Chamorro Land lease debacle.

But now that both Senator Aguon and Governor Calvo are calling for a moratorium on all CLTC leases and licenses, PNC’s questions — drawn straight from Senator Aguon’s moratorium bill — are straight to the point:

Our viewers await the director’s reply.