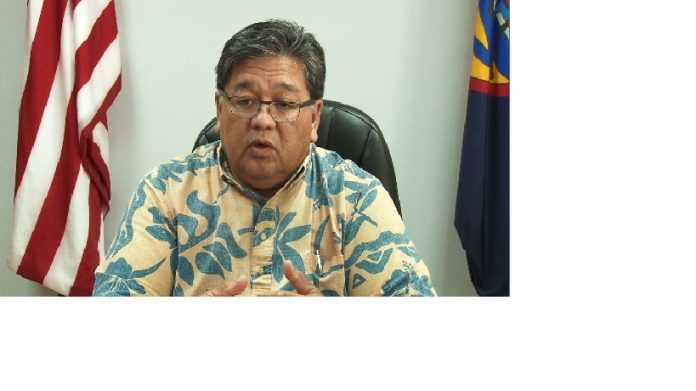 Guam – The controversial Chamorro Land Trust property access clearing in Barrigada Heights has caught the eye and ire of many people as has the list of lessees of those properties.

At issue is the fact that the property has apparently been cleared, in record time, without proper permits for that clearing.

This morning on the Patti Arroyo show on News Talk K57, Director of Land Management Mike Borja admitted that may have been the case.

“It hasn’t been expressed in an MOU but in the process of being able to do all the roads resurfacing in the villages, which is not in federal funds, they have to be certain that where they’re paving is on an easement and so our job, since we have the only surveying crews left on Guam, is to go and do what’s called a centerline survey, find out where the center of that easement is, and then the crews from DPW can determine how wide, based on that center point. And that’s just to make sure that their roads are not going to encroach into private property,” explained Borja, adding, “Yes, maybe there was a failure along the way to get the permits. But it’s been recognized and it’s not happening any more.”

Borja says the work was stopped so they could correct that oversight.

Property clearing aside, also in question are the names listed as lessees on the distribution of those lands. Two in particular: Senator Regine Biscoe Lee and Department of Youth Affairs Director, Peter Alecxis Ada.

Lee says her mom applied for the property back in 1995 and never heard back from the CLTC until October 2016. Lee says it had taken so long to get that call back, she almost forgot she’d signed up. Her mom then decided the land would go to her.

“As soon as they identified the property, she made the decision, she paid for the survey, she paid for the mapping and for all of that to happen, she went back to CLTC, and asked if it was possible to give the land to me. And so there’s an additional process for that. That letter had to be notarized,” noted Lee.

Ada, meantime, also applied for his property back in 1995. But he’s getting a little more heat mostly because of the size of the lot he’s received. He was granted 2 acres of property but he says his lot is for agricultural use only.

“When they asked me in the application, I asked how many am I allowed? They said 2 acres per applicant,” explained Ada.

Lee says the brewing controversy was enough for her to ask for a full review of the distributions.

“Once I had found out what was going on, I also wanted to make sure everything was above board and so I asked our public auditor to perhaps look at … I know they do program and performance audits of government agencies so I’ve asked her and the attorney general to really look into this to ensure that this appearance of impropriety in awarding these lots, that we’re able to clear away those muddy waters and really just promote transparency with the people,” said Lee.

Borja believes what the OPA and the AG will find is that all processes were followed: