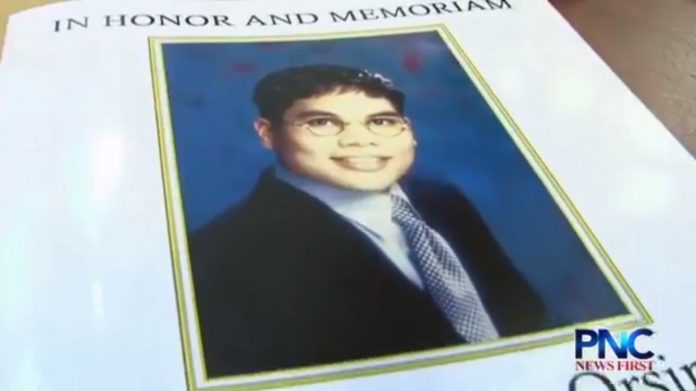 “He was concerned that our island not only be our paradise but look like one too,” — Tony Babauta.

“And Sonny, even in the years after his time in public office, continued to advocate for the best interests of the people of Guam and inspire incumbent and aspiring leaders to do the same,” said Senator Dennis Rodriguez Jr. as he read Resolution 187 to commemorate Orsini’s accomplishments.

In 1985, Orsini graduated from George Washington High School at the age of 16. He first pursued his interest in policymaking by serving in the 11th Guam Youth Congress and 12th Guam Youth Congress in which he served as Speaker. He studied political science at the University of Guam and served his peers in the student government association. He later transferred to the Bennington College in Vermont where he studied politics.

In 1993, Orsini ran for office and got elected to the 23rd Guam legislature where he placed fourth out of 21 candidates at the age of 25 becoming Guam’s youngest elected senator.

“I want to first say to Kim, thank you and your family for calling me when Sonny was first diagnosed with cancer. That type of tragic news I still imagine was unimaginable for Sonny and you. I want to also thank Sonny for asking and giving me the honor to deliver his eulogy at this state funeral,” said Babauta.

Despite his visible sadness, Babauta focused on all good things that Orsini accomplished.

“Not that legislators keep scores of their accomplishments but Senator Orsini, at the age of 25, as a one term legislator had five bills he sponsored become law, even in the midst of a fairly tumultuous 23rd. He was concerned that our island not only be our paradise but look like one too,” said Babauta, adding, in closing, “We remember his zest for life, and we are inspired by his example. Pues adios estaki. We will always miss you, my brother.”

Orsini was diagnosed with cancer in December of 2016. He passed away at the age of 48.