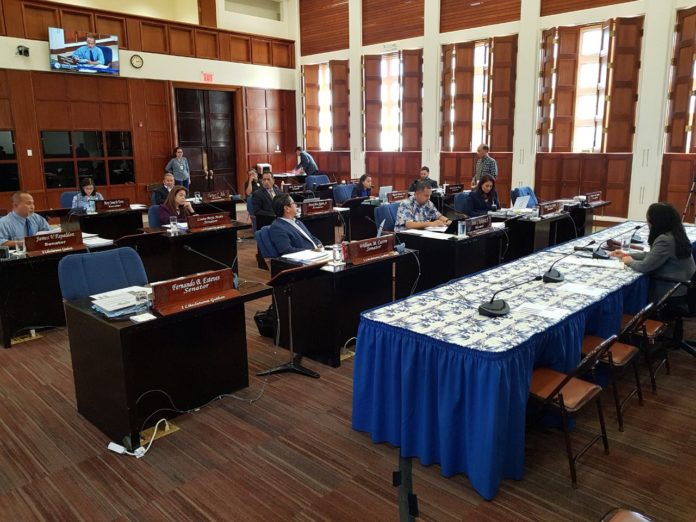 Guam – After taking one day off the legislature went back into session this afternoon(Tues) and voted against Bill 1(6-S) 11-3 with one excused absence for Speaker B.J. Cruz who is off-island. The only three Senators to vote yes on the Governor’s latest attempt to raise the Business Privilege tax from 4% to 6% were Senators Wil Castro, Tommy Morrison and Louise Muna.

This is the 6th special session the governor has called lawmakers into all 6 have dealt with some form of tax raising measure. In fact, before they could discuss this latest bill they had to dispose of bill 1(5-S) or the sales tax bill at the governor’s request. Then they began discussions on bill 1(6-s) which is another version of legislation to raise the business privilege tax from 4% to 6%.

Discussions began with amendments that would defund both the legislature and the governor’s office. Senator Dennis Rodriguez Jr. proffered a series of amendments that would’ve essentially defunded and shut down both the legislature and the governor’s office. “It is with a very heavy heart that I propose this amendment. This amendment would defund the funding for our body for the Guam legislature and there is impact to that,” said Rodriguez adding, “For our staff who didn’t sign up for this who didn’t sign up for days like these, we’re going to ask them to sacrifice with us.”

Senator Tom Ada asked what this would accomplish? “Basically, we’re gonna shut down the governor’s office and we’re gonna shut down the legislature,” said Senator Ada adding, “So maybe if the mover of the amendment would yield, I just want to make sure that what I’m reading is what I understand it to be. That it basically would shut down the legislature. All but a hundred thousand dollars maybe that’s to pay for the power bills that are coming due and all that. And then we’re gonna move onto the next amendment and it’s going to shut down the governor’s office. I’m just trying to understand what is accomplished by that?” Rodriguez replied saying in part, “It’s doing this or allowing a governor and lt. governor to allow for critical services to be reduced in our community.” Senator Ada said, “I guess I would just have to object to the amendment. I certainly disagree that this is a solution to what is going on right now thank you.”

Senator Tommy Morrison agreed with Senator Ada saying they are losing sight of the real issue at hand. Senator Jim Espaldon also agreed saying the amendment made no sense. “We all could be here. All the senators could be here to listen but if we have no employees to assist in the whole process to gather reports to be able to do all the things they do,” said Senator Espaldon adding, “I’m still not sure the intelligence of this whole move so I object.”

An amendment was successfully added to the bill that would reduce the salaries of the agency directors and governor’s cabinet members to pre-competitive wage act salaries. Another successful amendment would’ve required that the governor’s office pay for the overtime for executive security rather than GPD. An amendment to reduce the salaries of mayors to pre-competitive wage act levels failed and an amendment to raise the BPT by only one percent until March of next year also failed.

After voting the bill down lawmakers discussed their next move with Senator Mike San Nicolas suggesting that Senators take all of the information they have learned and heard over the last several days in session and put together a comprehensive bill themselves that addresses the fiscal crisis.

The Voting Breakdown is Below: