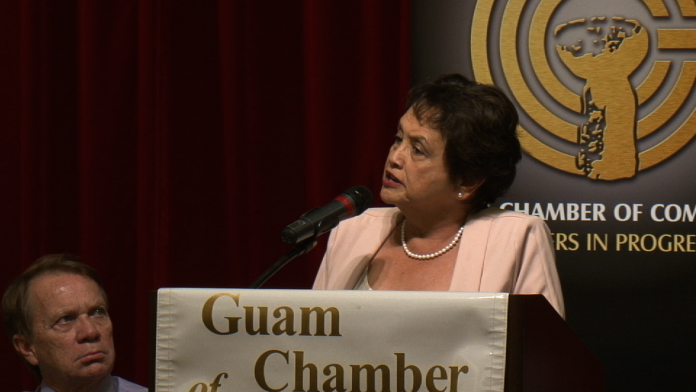 Guam – First there was no explanation, then it was based on allegations and recommendations made by the transition team.  Now, the Leon Guerrero administration says the resignation of the Governor’s initial pick for the Adjutant General of the Guard was amicable, and at the same time, partly due to insubordination.

Is a mixed message better than no message at all?  Adelup continues to find itself in the hot seat over the replacement of former Adjutant General Roderick Leon Guerrero.

In January, before Governor Lou Leon Guerrero took office, she announced her intention to retain her predecessor’s pick for the Guam National Guard’s commanding officer.  The Governor-elect at the time even offered her endorsement of the Republican-appointed Major General, calling him a proven agent of change.

But without explanation, he was replaced not one month later by Lt. Colonel Esther Aguigui.  And that’s when the mixed messages from Adelup began to come.

A draft transition report was leaked late Friday—alleging widespread corruption including sexual harassment, a climate of fear, and inappropriate romantic relationships within the island’s militia. And just yesterday, officials from the administration finally confirmed the appointment of Lt. Colonel Aguigui was a direct action in response to that document, its findings, and its recommendation on leadership changes.

And implicit criticism against the Governor’s first choice for Adjutant General turned into explicit accusations today on K-57.

Carlotta Leon Guerrero, the former senator who is now serving as Adelup’s Chief Advisor for Military and Regional Affairs, disclosed the former TAG was also insubordinate following a directive from the Governor: his commander-in-chief.

“A preliminary, rough plan was put in place that Governor Lou (Leon Guerrero) had a comfort level in.  And then immediately after that her directives were not followed and that caused her to lose confidence that—if she’s the commander-in-chief to be treated this way it just made you think how other people further down the chain could be treated,” Leon Guerrero claimed.

But just hours later, Adelup found itself walking back two days worth of blaming and carping.  A statement released by Communications Director Janela Carrera reads:

“As commander-in-chief, Governor Leon Guerrero chose whom she believed could best carry out her vision for the Guam National Guard, and that is Lt. Col Esther Aguigui.  General Leon Guerrero resigned from his position as The Adjutant General; it was accepted on amicable terms, and the Governor is appreciative for his many years of service to the Nation and our island.”

The lack of a clear message and reason behind the staffing decisions only spawn more confusion and questions.

How amicable can a resignation be if it comes following an indictment of leadership?  Wouldn’t the Governor fire someone for insubordination? If Lt. Colonel Aguigui was the best choice for the Governor’s vision of the Guard, why wasn’t she chosen in the first place?

And perhaps the answers provided will just make the proverbial waters surrounding this agency even murkier.