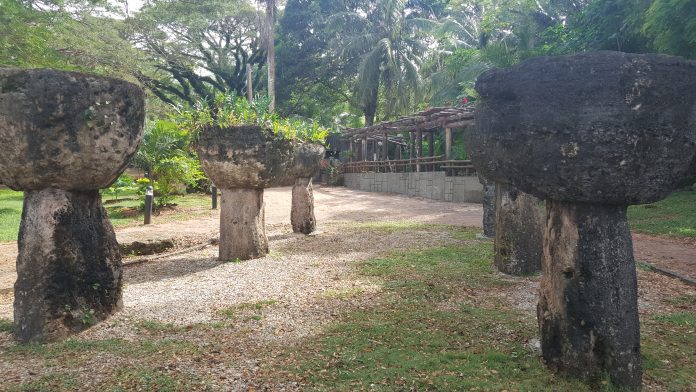 Guam – Pictures of overflowing trash, bathrooms locked for repair and now a major tourist sight seeing destinations is in disrepair, an upsetting sight for tourist and locals alike.

“I am doing a photography workshop and part of the workshop is to take children who are learning photography to a place where we can freely take pictures and take pictures of beautiful things so we decided to bring them to the Latte Stone Park,” stated Luis Santos.

For Luis Santos and his group of children from under served communities, looking through a lens really put the state of the park in perspective.

Concrete beams caved in, light posts toppled over and completely broken from its base, a sign with the concrete foundations deteriorated and feces in the hallway to where the locked bathrooms, this is what Lewis and his aspiring photographers were met with.

“When we arrived here it was in such disarray it was kind of disappointing. Then we had to make the children go to places that weren’t hazardous and it was just a little disheartening. He continued, they didn’t understand the reason why we had to keep them from going into the places that were obviously hazardous the concrete pillars are falling down,” expressed Santos.

But that isn’t the only surprise the class encountered. Latte Stone Park is also a place that some homeless individuals have begun to take up residence. A walk around the park you will find some of their belongings neatly stored away, but it appears that the homeless situation at the park may be driving some visitors away.

“As the workshop went on a few of them came down and started yelling at the children making threats to them and so that became a little bit of a hostile environment so we packed everything up and we left,” explained Santos.

Raising the question what image does instances such as this perpetuate to tourists? Santos share his notion of what that may be.

“Well if I was a tourist and I cam to this site I would probably tell everybody do’t invest our money. Go somewhere else. It just needs help our parks need help our beaches need help its a sad state,” Santos says.

PNC has reached out to department of parks and recreation for an interview , which has been scheduled for next week Tuesday.