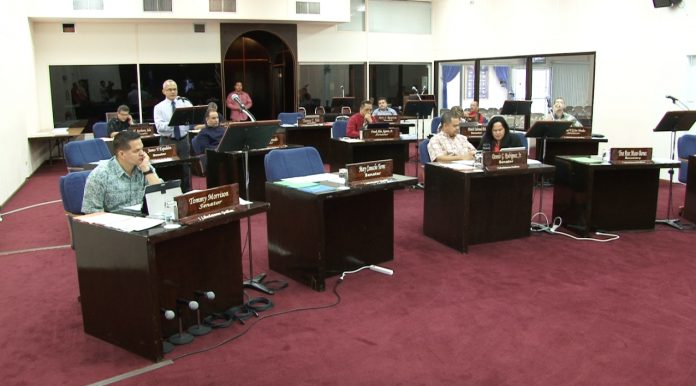 The first major discussion to take place at session on Monday occupied lawmakers for the better part of the morning.

Guam – Today (Monday), lawmakers held session where everything from tax refunds to invasive species was discussed.

The first major discussion to take place at session on Monday occupied lawmakers for the better part of the morning. It centered around bill 228-33 which would authorize collected in excess of the adopted FY 2016 budget to be used to help pay for tax refunds. The Mike San Nicolas sponsored bill however did receive criticism from senators over of its specified language.

“He did mention, once we collect, according to this bill as he stated, once we collect and pay off the refunds than any excess can be then be appropriated towards any purpose we deem appropriate but that’s not how this reads, this basically says that all excess goes towards the tax refund fund,” said Senator Jim Espaldon.

One of the concerns was over section 4 of San Nicolas bill, which restricted appropriation of any excess estimated revenues to anything other than the tax refund trust. Senator Tina Muna-Barnes voiced concern that the bill includes the use of special funds, such as the tourist attraction fund, to pay for tax refunds. Senator Barnes says special funds are created for a specific reason, but Vice Speaker B.J. Cruz disagreed.

“Nobody is sharing with me whatever it is, whether its recreational or medicinal that makes them think there is going to be excess funds this year,” said Cruz. “Some of the special funds in this years appropriations bill were used to run the government in other departments and it was necessary to be able to balance the budget.”

The amendments offered to delete section 4 and remove the use of special funds were passed and bill 228-33 was moved to the third reading file.