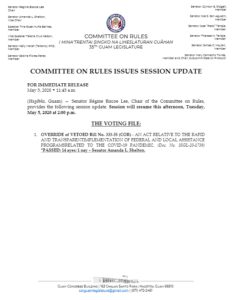 Guam lawmakers overturned the Governor’s veto of Bill 333-35 this morning.

14 senators voted in favor of the override. Only 1, Sen. Amanda Shelton, voted against it.

“I am not against the goal of Bill 333,” said Sen. Shelton in a news release. “But as I said on the floor, trust and transparency cannot be legislated.  It is my hope that the Governor and especially those who serve directly under her, not only understand the importance of trust and transparency, but practice these values every day.”

Bill 333-35 was introduced by Sen. Therese Terlaje. It requires “a rapid and transparent implementation” of federal assistance programs related to the COVID-19 pandemic.

“This is the first successful override of the term,” said Sen. Terlaje in a release following the override. She called the vote “a statement of unity with the people of Guam.”

“This bill was not meant to be adversarial.  It was meant to provide a clear guideline so we did not impede the government’s response efforts, ensured that affected agencies had legal authorization to draft necessary agreements and placed reasonable reporting requirements for hundreds of millions of dollars flowing into the local government,” said Senator Terlaje. 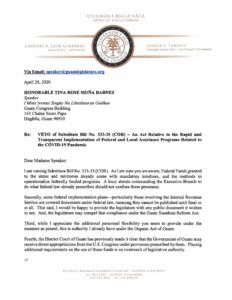 In her veto message last week the Governor wrote -“As I’m sure you are aware, Federal Funds granted to the states and territories already come with mandatory timelines,” wrote the Governor. “A local statute commanding the Executive Branch to do what federal law already prescribes should not confuse these processes.” 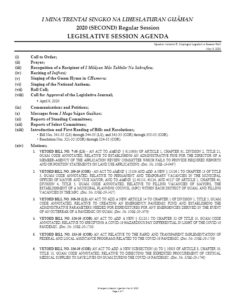