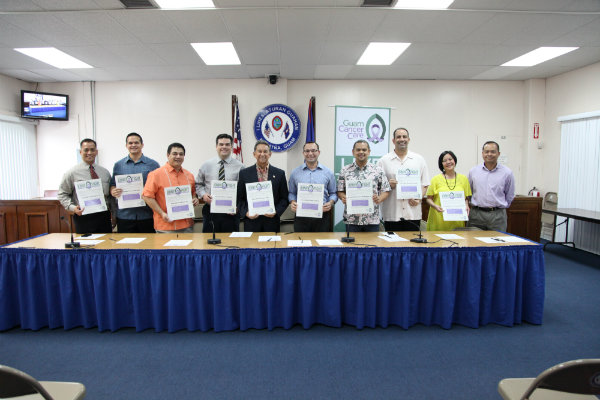 Guam –  Senators of the 32nd Guam Legislature have pledged to “Join the fight” against cancer on Guam.

Guam Cancer Care launched the “JOIN THE FIGHT” in April.  Participants pledge to encourage and allow employees to get screened for cancer;  encourage healthy eating and exercise to promote a healthier work environment; and encourage participation to take proactive steps in the fight against cancer.

According to a news release from Guam Cancer Care, cancer accounts for nearly one in every five deaths on the island.

READ THE NEWS RELEASE FROM GUAM CANCER CARE BELOW:

Senators of the 32nd Guam Legislature will come together in a unified stand in the fight against cancer on September 30th, at 2:00pm at Legislative Hearing Room in the Guam Legislature Building in Hagatna. They will sign Guam Cancer Care’s JOIN-THE-FIGHT pledge and commit, as a legislative body, their support of the Fight Against Cancer here on island.

Guam Cancer Care launched its “JOIN THE FIGHT” pledge in April 2013, with a mission to work directly with our island leaders, business community members and other non-profit organizations in the local fight against cancer.  As an advocate of the ‘”JOIN THE FIGHT” pledge, participants pledge to encourage and allow their employees to get screened for cancer in line with approved cancer screening guidelines; disseminate information in reference to cancer screening and early detection programs; encourage healthy eating and exercise to promote a healthier work environment; and encourage participation to take proactive steps in the fight against cancer.

“In order to make a significant difference, our community needs to come together and unite in this Fight that has affected the lives of hundreds, if not thousands, of our fellow island residents.  I am humbled to be standing alongside our island leaders to unite against a disease that is truly affecting our community,“ says Terry Cuabo, Executive Director for Guam Cancer Care.

On Guam, cancer accounts for nearly 1 in every 5 deaths.  Every year, an average of 316 people were told by their doctor they had cancer, and 144 have died from it.  That’s one person dying from cancer every 2 to 3 days on our small island of Guam.

Within two operational years, Guam Cancer Care’s Patient Navigation program has assisted over 440 Guam residents afflicted by cancer and brought in over $1,810,538.02 in external resources, to included but not limited to; low to no-cost chemotherapy drugs or direct financial assistance for eligible Guam cancer patients from stateside organizations via cancer organizations/foundations and pharmaceutical companies.  In addition, Guam Cancer Care has issued out approximately 335 Financial awards to a total of $456,800.53, helping to cover the costs of much needed cancer treatments for patients who are currently on active treatment.

Funding provided to Guam Cancer Care comes out of the Guam Cancer Trust fund, which was established by Public Law 30-80, and redirects 15% of all tobacco taxes generated within the Territory to be deposited to the Guam Cancer Trust Fund, under the purview of the University of Guam, to be used exclusively to provide direct services for Guam cancer patients.