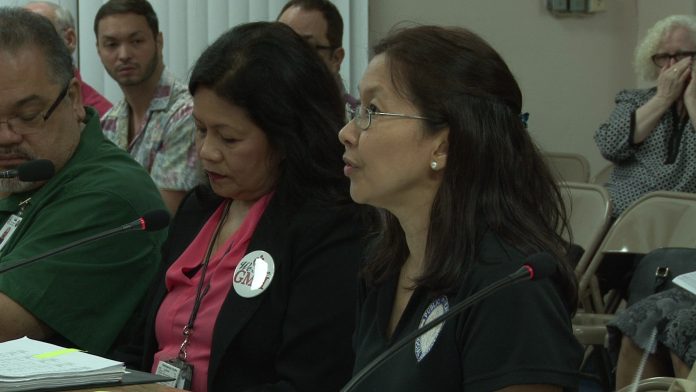 Private doctors and representatives from Public Health, Guam Memorial Hospital, Office of Public Accountability, and the Hospital Management Advisory Team were present at the hearing.

Guam – Stakeholders in the healthcare community provided their input last night on a measure that proposes a massive Guam Memorial Hospital bailout through refinancing of existing debt. Although informal, the hearing was held to clear up any misconceptions about how the proposals will affect Guam.

Bill 340, along with bill 341 and another bill by Governor Eddie Calvo have been mired in controversy. In particular, bill 340 proposes to refinance existing debt in order to pay off $20 million in vendor payables at the Guam Memorial Hospital.

The bill was referred to Senator Michael San Nicolas’ committee on taxation but after refusing to schedule a public hearing on the bill and at the urging of other healthcare community leaders, Committee on Rules Chairman Senator Rory Respicio pulled the bill from San Nicolas and referred it to Senator Dennis Rodriguez’s Committee on Health.

An informal hearing was held on the bill last night where several stakeholders and lawmakers discussed healthcare issues related to the measure. They mostly focused on the topic of Medicaid reimbursement rates, which appears to be in direct response to San Nicolas’ demand to increase the rate for GMH.

“People keep saying we have to increase the reimbursement of Medicaid and MIP. With Medicaid we pay Guam Memorial Hospital per diem rate of $1,108. It used to be $332 when I started way back and for outpatient it used to be 32 percent. It’s now at 97 percent,” says Tess Arcangel, Human Services Administrator for the Department of Public Health and Social Services.

Arcangel pointed out that Medicaid funding for Guam is provided through the Affordable Care Act but only if Guam furnishes a local match. So an increase in Medicaid reimbursement means GovGuam would need to increase its local match as well. There’s also the problem of the Affordable Care Act itself. Public Health says the $153 million in ACA funding for Guam will expire in 2019. In fact, Public Health Director James Gillan says before ACA funding, Guam spent less than a million in Medicaid.

As far as allocation for the funding, Arcangel says Public Health doesn’t have control over the rate of reimbursement.

Meanwhile, the Hospital Management Advisory Team also told lawmakers that contrary to San Nicolas’ analysis of the bills, the life of the loan will not be extended even with proposed refinancing of bonds.

“We are taking for example, the Bank of Guam loan and structuring bonds that will run the remaining terms of up to around 2024. Similarly, we would take the bonds and sell them to match the current maturity for the section 30 bonds to 2034-35 timeframe. So there would be no extension whatsoever,” says HMAT member Lester Carlson.

So what exactly does that mean if GovGuam is able to refinance their debt at the terms they are hoping for?

“It details what the savings would be in total and it would be $15.7 million,” says Carlson.