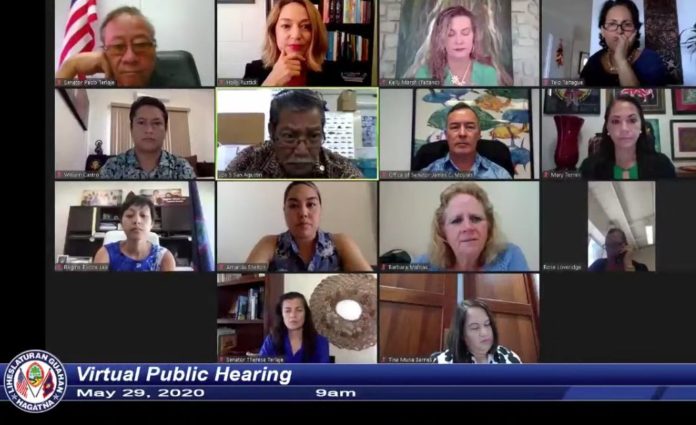 Hers was the first of four public hearings scheduled in a marathon proceeding that ran until 8 p.m.

The big question, still without a definitive answer, is where the money would come from to fund any of the double pay bills, and even more, whether CARES Act federal dollars can actually be used to fund these bills.

At Friday morning’s 9 a.m. to 11 a.m. public hearing, representatives from the Department of Administration and the Bureau of Budget and Management Research were not present, which senators say was crucial for them to gain clarity on this issue.

BBMR did provide a fiscal note for each of the four bills.

To start, the Governor has carved out $22 million dollars from the CARES Act to pay out the GovGuam differential pay she mandated in an earlier executive order.

BBMR says that money is to cover differential pay from March 14 until Dec. 31, which is actually estimated to run around $18.7 million. The remaining $3.3 million is for unforeseen overtime needs, according to BBMR’s explanation.

That calculation relates to Senator Nelson’s Bill 357 for front-line double pay during the PCOR 1 period and Senators San Agustin and Kelly Marsh’s Bill 361, which would deem this emergency much like a typhoon and allow double pay until the emergency is over.

The fourth measure, Bill 359 — the so-called “compromise bill” on the double pay issue — would cost the government a maximum of $4.5 million.

That’s the bill authored by the Speaker with bipartisan support and publicly announced by the governor with the backing of Guam Federation of Teachers union rep Robert Koss (who later did an about-face and rescinded his support to get behind Senator Nelson’s double pay measure instead).

In Bill 359, workers could accrue one hour of annual leave time for every hour they worked in PCOR 1 for a maximum of 240 hours. And of that, they could cash up to 120 hours.

Many front-liners scoffed at this bill, saying double pay is the only compensation that reflects the risks they’ve taken during this pandemic.

At this morning’s hearing, Holly Rustick from the Guam Women’s Chamber of Commerce added her testimony against double pay, saying it discriminates against the nearly 55,000 private-sector employees.

“In a perfect world, everyone who worked and put their lives on the line during the pandemic — from healthcare workers to restaurant staff serving take-out meals — deserves just compensation. Your legislation says to them, you only matter if you’re a government employee,” she said.

Rustick says her testimony stands against all the double pay bills, except Bill 358.

Senator Nelson responded to Rustick, saying her original legislation that was shot down had a 10% pay mandated for the private sector.

“I just wanted to clarify that the funding to pay the private sector would come from the Government of Guam, they would support that. But to force private sectors to pay double pay … that’s a whole different public hearing, if you ask me,” Taitague said.

Nurses testifying this morning say their big issue is the discrepancy in pay altogether. Two who testified online said their agencies were closed during the pandemic and they were redirected to work elsewhere but their pay wasn’t reflective of that.

Overall, the resounding sentiment among the attending Senators this morning was an urge to fairly compensate GovGuam front-liners but there was a serious lack of clarity of where they would get the money to do so.

The governor has previously stated that the GovGuam cannot afford any more compensation and that if double pay is legislated she’ll be forced to furlough GovGuam employees.