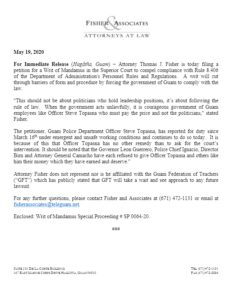 Attorney Thomas Fisher today filed a lawsuit in the Superior Court seeking an order to force the Government of Guam to provide double pay to GovGuam employees who were required to work throughout the ongoing state of health emergency.

Fisher during an online news conference this afternoon said that the bill introduced by Speaker Tina Muna Barnes to prove extra leave that can be cashed out, and the two other bills introduced by Vice-Speaker Telena Nelson to provide double pay and hazard pay, are all unnecessary.

He cited Rule 8.406 of the Department of Administration’s Personnel Rules and Regulations which states that when a public emergency has been declared:

“Those employees, required to remain on duty to provide essential services, shall be paid at double the regular rate, or granted compensatory leave credits for the hours worked during the period the facility is closed and the other employees are on excused leave.”

Fisher said the law is clear and the bills proposed by Speaker Tina Muna Barnes and Vice Speaker Telena Nelson are unnecessary.

The lawsuit said Fisher “will cut through barriers of form and procedure by forcing the government of Guam to comply with the law.”

The lawsuit was filed on behalf of Guam police officer Steve Topasna and other GovGuam employees similarly situated.

“When the government acts unlawfully,” he said “it is courageous government of Guam employees like Officer Steve Topasna who must pay the price and not the politicians.”

READ the release from Attorney Tom Fisher in FULL below:

For Immediate Release (Hagåtña, Guam) Attorney Thomas J. Fisher is today filing a petition for a Writ of Mandamus in the Superior Court to compel compliance with Rule 8.406 of the Department of Administration’s Personnel Rules and Regulations.  A writ will cut through barriers of form and procedure by forcing the government of Guam to comply with the law.

“This should not be about politicians who hold leadership positions, it’s about following the rule of law.  When the government acts unlawfully, it is courageous government of Guam employees like Officer Steve Topasna who must pay the price and not the politicians,” stated Fisher.

The petitioner, Guam Police Department Officer Steve Topasna, has reported for duty since March 16th under emergent and unsafe working conditions and continues to do so today.  It is because of this that Officer Topasna has no other remedy than to ask for the court’s intervention. It should be noted that the Governor Leon Guerrero, Police Chief Ignacio, Director Birn and Attorney General Camacho have each refused to give Officer Topasna and others like him their money which they have earned and deserve.”

Attorney Fisher does not represent nor is he affiliated with the Guam Federation of Teachers (“GFT”) which has publicly stated that GFT will take a wait and see approach to any future lawsuit.