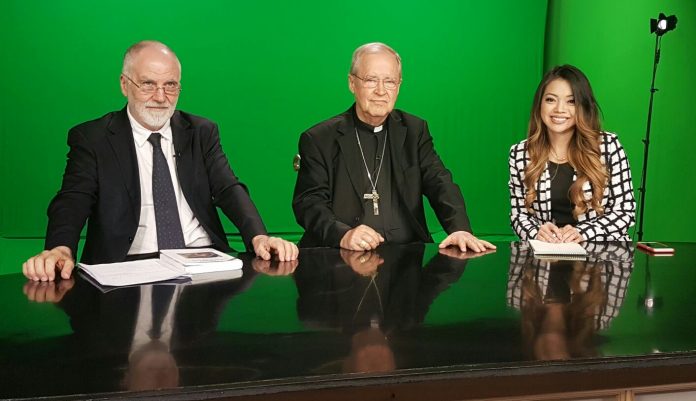 Cardinal Paul Cordes and Professor Giuseppe Gennarini are on Guam to teach courses at the Redemptoris Mater Seminary in Yona.

Guam – They have been persecuted even before their arrival on Guam but Cardinal Paul Cordes and Professor Giuseppe Gennarini have been largely silent since coming here. We bring you an exclusive interview with the leaders of the Neocatechumenal Way to talk about the history and purpose of their faith.  They also respond to some of their critics.

Cardinal Paul Cordes and Professor Giuseppe are on Guam to teach some courses at the Redemptoris Mater Seminary in Yona. We had the opportunity to sit down with the cardinal and professor, both of whom are considered key individuals in the Neocatechumenal Way. They talk about “the way” as they are often referred to. Cardinal Cordes speaks about how the neocatechumanal way was born.

“There were several initiatives, so called spiritual movements and one of these movements is the Neocatechumenal Way founded by a painter of Spain and he was very successful because he was very sensitive to what people are feeling today,” says Cardinal Cordes. “Many of us have been baptized as babies and so we don’t feel so strongly linked to our baptism as in the early Christianity.”

The cardinal says the Spanish founder, Kiko Arguello, came from a rich family, but he decided to live among the poor in order to learn from them and see how he could help renew the faith of those who felt disconnected from the church. The Neocatechumenal Way, Cardinal Cordes explains, is a sort of school of faith and gives adults and young adults a chance to experience the effect of being baptized and renewal of their faith. Professor Gennarini emphasizes however that it is not necessarily a second baptism.

“This is not allowed. The baptism of babies is valuable. But on the other side they prepare the adults or the young people in order to rediscover the value and the grace of baptism,” explains Gennarini. “Because the world has changed, thinking has changed and so we have in a new way rediscovered our faith.”

While there are many misconceptions out there about the Neocatechumenal Way, Gennarini and Cordes say they have received the blessings of several popes, including Pope Francis.

“[Pope Francis] gave a bible’s talk about the Neocatechumenal Way. He was very much appreciating. I was there,” says Cardinal Cordes. “Because normally if you say something positive in a certain moment there will come ‘but,’ but there was no ‘but’ in his talk and so I was so surprised that he was so identified with the work and the message of the Neocatechumenal Way.”

“We have now John XXXIII, his holy; John Paul II; Benedict and now Francis,” he adds. “It’s a grace for the church.”

Finally, they respond to some of the criticism from some in the local catholic community. Gennarini says most of the frustration stems from false information being spread amongst Catholics.

“Both of us, we came to give a course in the Theological Institute and myself too. I accepted this invitation to speak, with the cardinal, at this television because we thought it was important to greet all the people of Guam, the people of goodwill, that we are very happy to be in Guam,” says Gennarini. “We understand also their expression, there may be a frustration, but this is due to false information.”

“To say it in a very simple way, become holy then this will help and it will make you happy,” says Cardinal Cordes.

PNC will be airing the full interview with Professor Gennarini and Cardinal Cordes. The time and date will be announced soon so make sure to stay tuned to find out when our segment with the Neocatechumenal Way will air.