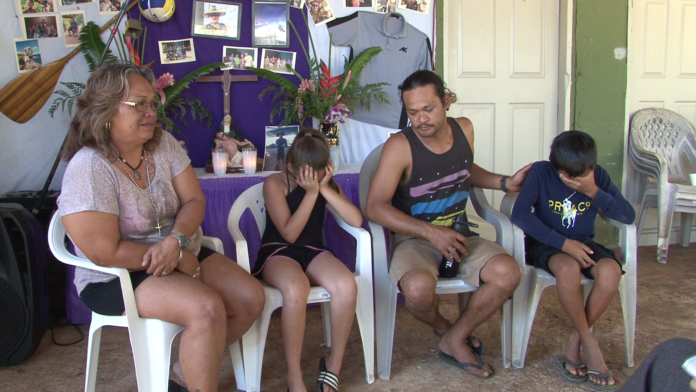 In his final days, Leebrick Manglona or “Lee” as his family and friend’s called him, spent time enjoying life. He was full of life and energy and always stayed grounded among the people who knew him best: his family.

Eleanor Manglona San Nicolas, who was like a mother to Lee, could barely contain her emotions as she talked about her beloved nephew.

“I had his last dinner with him Thursday night. Right after we ate, he goes, ‘Mom, go to sleep cause we work tomorrow,” said Eleanor. “He’s always happy, he’s always smiling, he’s always up for an adventure. He’s so devoted to playing softball, volleyball, paddling.”

“Every day, after work, that’s their normal routine, they go to the gym, Paradise Fitness, they work out, he comes home. he’s so happy,” recalls Eleanor.

Sadly, Lee’s life was cut short last Friday after a brutal assault at the parking lot of where he worked, AK Toyota, after a company barbecue had ended.

“Now we won’t be able to see that. Something so precious like life itself shouldn’t be taken into people’s hand and taken away from somebody,” added Eleanor.

The man police believe is responsible for Lee’s death is 31-year-old Jonathan Ross Pangelinan. Not only is Jonathan Lee’s coworker, the two were family friends who grew up together. Pangelinan has been charged with first degree murder and aggravated assault and is being held on $100,000 cash bail.

And now Lee’s untimely death has caused a rift in the family.

“I’m Jonathan’s aunt also by my husband’s side. I know Jonathan from the minute he was born, just like Leebrick, until today. I never knew Jonathan as a violent person,” explained Eleanor. “It’s like Leebrick, he didn’t even know, he didn’t even get a chance to defend himself. Like who is so mean or has evil in their heart to attack someone and not even give them a chance to defend themselves.”

But even with a tragedy like this, Eleanor says it will not divide their family. She has a message for Jonathan’s wife and their family:

“The wife and his children, they’re more than welcome. Our arms are open, our hearts are open to mourn, to weep together and I don’t ever want her to think that we’re against her. Family stands strong and family stands as one.”

The children in Lee’s life also left a message for him:

“I miss him. I’ll miss the fun times we had together,” said Keithen Decipulo, Lee’s Godson.

PNC: “If you had a message for your dad, if he could hear you right now, what would you tell him?”

“I love you daddy,” said Lee’s 10-year-old daughter Tamiya Penaflor as she broke down in tears.

Rosaries for Leebrick are being said nightly at the Manglona/San Nicolas residence along YsengSong Rd across from Sagan Linahyan in Dededo with final viewing scheduled for April 6.