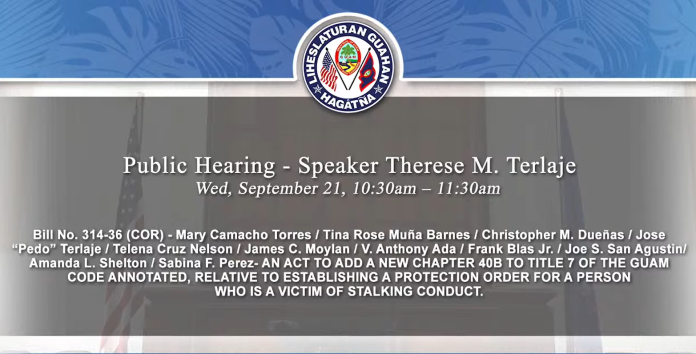 In legislative news — a new bill aims to provide a remedy to victims of stalkers by allowing them to request protection orders against their perpetrator.

Reporting on this bill is PNC’s, Khyomara Santana…

Bill 314 would protect a person who is a victim of stalking, which may include physical, verbal, written, electronic, telephonic, or other forms of online stalking even if the victim has not had any relationship with the perpetrator.

This is the last of the three bills introduced by Senator Mary Camacho Torres, which were discussed during a public hearing yesterday.

Attorney Daniel S. Somerfleck, Executive Director of Guam Legal Services Corporation said,  “For protective orders, generally in the path, we’re looking for the blood. Where’s the violence? Where’s the imminent threat of violence? This doesn’t talk about violence, this talks about intimidation, this talks about threatening and this talks about causing fear; and to me, this is just another step in providing protection.”

The senator added that a 2009 report indicated that over 35% of stalking victims or their loved ones were physically attacked by their stalker and 24% had property damage, which means that even if there is no violence, stalking can escalate to other crimes.

Attorney Somerfleck added, “If there are no threats, there is very little that I can do to assist a victim, with this legislation, that ends.”

Bill 314 creates a separate protection order for victims of stalking, who right now have few legal options, and also acts as a preventive measure for further damage.