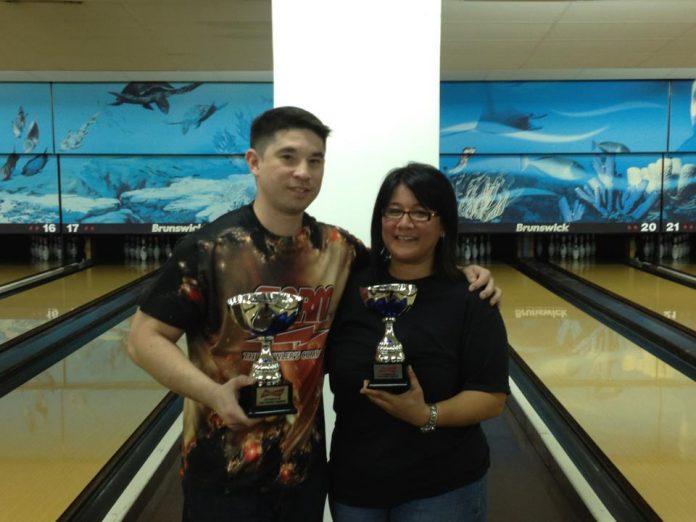 Tamuning, Guam – Jay Leon Guerrero and Arlene Taitague stamped their tickets to the yearend Grand Finals as both keglers won their respective divisions during the monthly tournament of the Budweiser King and Prince of the Lanes held on Sunday, February 23, 2013 at the Central Lanes Bowling Center.  Leon Guerrero out dueled his former mentor Manny Tagle 233-207 while Taitague outpointed defending monthly champion Colleen Dela Cruz 166+18 to 158+22 to hoist their trophies.

Leon Guerrero and Tagle edged their top seed opponents in the semi-final round with 5th seed Leon Guerrero upending top seed JD Castro by six pins, 185-179 and Tagle getting past 2nd seed Ricky Duenas by a mark 203-191.

[Photo(L-R): Jay Leon Guerrero and Arlene Taitague win the monthly Budweiser King and Prince of the Lanes at Century Lanes]

The next Budweiser King and Prince of the Lanes will be held on Sunday, March 17, 2013 at 11:00 a.m. at the Central Lanes Bowling Center.