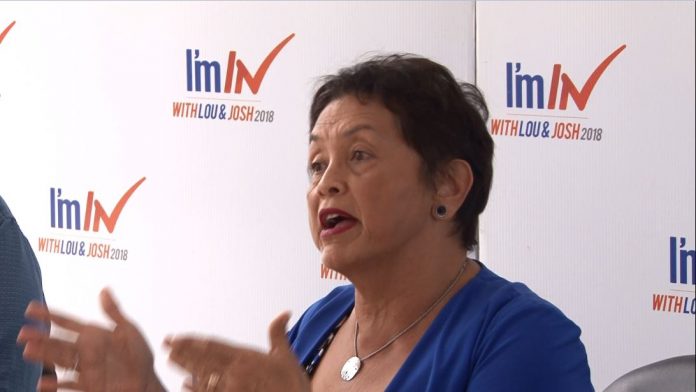 Guam – Democratic candidate for governor Lou Leon Guerrero is setting the record straight on a BOTA Tenorio-Ada newspaper advertisement that she says misrepresents her attitude toward foster children.

A Tenorio-Ada ad on page 11 of Monday’s Pacific Daily News shows Republican gubernatorial candidate Ray Tenorio playing checkers with an anonymous child. And the headline cuts straight to the chase: “When foster children needed a home, Lou said NO.”

But is that what she really said? Not exactly. The issue goes back four years ago when a bill was introduced to build a foster home on the Oka Point cliff in Tamuning—a site Leon Guerrero thought was too steep and too close to fast traffic, so she opposed it in a letter to then-Vice Speaker BJ Cruz during the 32nd Guam Legislature.

“When I heard about this, I was concerned primarily because that area is not safe for children,” Leon Guerrero told reporters gathered at her new gubernatorial campaign headquarters at the former Nissan Auto City near the corner of Route 8 and Marine Corps Drive on the edge of East Agana.

“Having a foster home on the cliff-line side was, to me…it was dangerous to our children. And what could happen is the children could—when they’re running around, could run off, close to the cliff-line, fall into the ocean, with the reefs and rocks there. Also that area is heavily trafficked, and so I can just imagine a child outside playing, running into the traffic and getting hit.”

It’s not the first ad depicting Tenorio connecting with everyday people, showing how he’s more like the disadvantaged than his Democratic opponent, Leon Guerrero, because he grew up poor.

The ads raise the question of whether candidate Tenorio is using disparities in income as a wedge to divide rich from poor and pit social groups against one another as Guam approaches November’s general election.

While Tenorio can undoubtedly claim he grew up in the school of hard knocks and understands the problems of those less fortunate, Leon Guerrero may not be as far removed from those problems as Tenorio suggests. After all, she served all of Guam, including the indigent, as a Democratic senator as well as a Guam Memorial Hospital Authority board member and a GMH registered nurse not far from the cliff where Tenorio claims she failed to care.